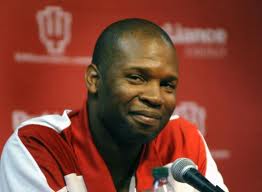 Calbert Cheaney is leaving Indiana University for a second time.  Twenty years after he was the sixth player taken in the 1993 NBA Draft, Cheaney is leaving his position as the Hoosiers’ director of basketball operations to take the spot on Jim Crews’ Saint Louis University staff vacated by Jim Whitesell.

The difference between the two jobs explains the motivation for the move.  DOBOs cannot recruit, but full assistants can.

If Cheaney is going to build a resume’ as a candidate to be a head coach, which is his goal, he needs to build a network of recruiting contacts, and the best way to do that is to recruit, something rules prohibit him from doing as the DOBO.  At St. Louis, he’ll be able to get that done.

Getting several points of view as to how a head coach should attack his job is a good thing too, and there are few better at that than Jim Crews, who put together a fine first season at SLU after the sad passing of former SLU head coach Rick Majerus.  Tom Crean has an indomitable work ethic, and Crews is a master strategist, having played and worked for Bob Knight, and coached with Majerus, one of the best defensive coaches in the history of the game.  That combination of mentors should help mold Cheaney into an excellent candidate for his first head coaching gig.

There are those who will look at this as something more than a young coach trying to build a skill set that will allow him to pursue his dream, but the hole opened at SLU is a really good fit for Cheaney, and Crews was smart enough to see that.  This is about Cheaney going to a great situation for him, not a disgruntled coach leaving a bad one.

This also gives Crean a chance to hire another DOBO who will have a positive impact on the Indiana Basketball program.

Cheaney will be missed at IU as a coach just as he was as a player.

3 thoughts on “Indiana Basketball – Calbert Cheaney Leaves IU for St. Louis for All the Right Reasons”