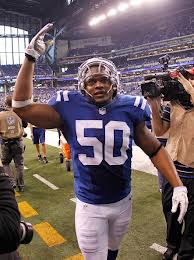 Jerrell Freeman will be one of 53 great reasons to be a fan of the Indianapolis Colts in 2013.

The road travelled by Jerrell Freeman to the NFL was a longshot.  To become a starter for a playoff team was even more improbable.

Freeman joined Fox 59’s Jeremiah Johnson and me to talk Colts football, his recovery from injury, and how the hell he got to the NFL in the first place.

He played college football at Mary Hardin-Baylor – a division 3 school.  After being signed as an undrafted free agent by the Tennessee Titans in 2008, he was released prior to the season.  “Next stop Saskatchewan!” isn’t the phrase a kid with NFL dreams wants to hear, but Freeman made the most of it.  He was a special teams stud as a rookie in the CFL, a starter at linebacker in the second, and led the CFL with 105 tackles in his third.

That was enough for the Colts to give him a shot.  Freeman answered that challenge too.  He made 145 tackles, which ranked fifth in the NFL.

This isn’t the first time the Colts have taken a chance on an underdog inside linebacker.  Gary Brackett was signed as a UFA in 2003, and became the starter in 2005 – a position he held through the 2010 season before injuries hastened the end of his career.  At Rutgers, he was a walk-on who became a captain.

The more we talk to professional athletes, the more clear it is that the stories behind their success are not those of a magical athlete being anointed as the greatest thing since sliced bread, but of hopeful and hard-working men who found a way around rejection to the realization of a dream they refused to let go of.

Listening to Freeman is to learn why you should root for him in the same way Colts fans embraced Brackett.