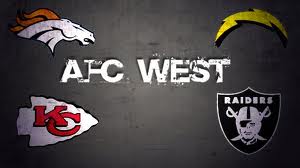 Most divisions in the NFL will provide at least a little intrigue, but the AFC West is nothing but a coronation for the Denver Broncos as long as Peyton Manning remains upright.  Kansas City is the media darling pick to be the most improved team in the league, but isn’t going to be as good as advertised.  San Diego is embarking down a new road after being perfectly average last season, and Oakland will battle for the first overall pick in the draft with Jacksonville.

The Broncos will go as far as Peyton Manning can take them.  He appears to be throwing the ball with more zip and precision after a 2012 where he relied upon guile to recapture his place in the NFL hierarchy of stars.

Schedule – Bad breaks in that two of the three toughest games on the Broncos schedule are on the road – @ NY Giants (9/15) and @ New England (11/24).  The Broncos also travel to Indianapolis in a highly anticipated of Manning to the building his excellence produced.  They also head to Houston and Dallas.  While the schedule has its share of cupcakes, the Broncos will need to succeed in hostile environments to match its 13-3 record from 2012.

Offense – As he has been throughout his career, Manning is the key to the success or failure of the team for whom he plays, and despite not having his fastball in 2012, he put up statistics that looked a whole lot like those he enjoyed in Indianapolis for the 13 years he made every start as a Colt.  Manning completed an NFL best 68.6% (14th best of all time) in 2012.  He also led the NFL in adjusted net yards per attempt (7.89).  I could go on, but you get the picture – Manning is a stud with every bit the productivity as he has always had, and now he’s throwing it better.  He’s going to pass Dan Marino for second place in passing yards roughly halfway through this season, and will need three healthy years to catch Brett Favre for the all-time lead.  The best reason for optimism that Manning will break Favre’s records is that Manning’s athleticism really can’t erode much further.  Becoming slow can’t happen to Manning because he was born there.

Montee Ball is going to give the Broncos a different dimension to their running game, so when Manning decides to put the game in the hands of his running back, like he has done quite a bit during some unsuccessful postseasons, maybe they can succeed.  As is always the case with the offensive lines on Manning teams, they are paid to protect the passer, so running the ball will be a challenge on occasion.

Wes Welker, Eric Decker, and Demaryius Thomas will be exceptionally productive.  All might catch 100+ passes.

Defense – Losing Elvis Dumervil to free agency as the result of a clerical error and Von Miller for the first six games of the season due to suspension is going to make it difficult for the Broncos generate the same level of heat on opposing quarterbacks.  The job of the defense is to get one more stop than their counterparts are able to attain against the Manning led offense.  That was always the Colts plan with Manning, and it worked well for a decade.

The Chiefs are the beloved moppets of the NFL this year.  Everyone loves the addition of Alex Smith and Andy Reid, but let’s remember that the Chiefs were 2-14 in 2012, and the road from terrible to to the playoffs is likely to take more than one year.  The Rams made a similar coaching move after 2011, and that brought them a 5 1/2 game bump, so I’m predicting the same.  Who has two thumbs and the stones to predict a tie?  This guy!

Schedule – Whether the Chiefs are pretenders or contenders will be revealed during the first six weeks of the 2013 season.  They travel to Jacksonville for the opener.  A loss there, and the Chiefs are in big trouble.  The second tilt is a home game vs. the Cowboys.  As long as the Chiefs are 1-1 after that game, they are in good shape.  Reid’s homecoming to play the Eagles on Thursday, September 19, will be a big game for both teams.  The next three are vs. Giants, at Tennessee, and vs. Raiders.  If the Chiefs are 3-3, life is good; 2-4 or worse is uh-oh.  The Chiefs will get better, but it’s likely to take time.

Offense – Acquiring Alex Smith to lead the Chiefs offense is a big deal.  His combination of sort ball accuracy and mobility makes him a great fit for Andy Reid’s west coast offense.  Jamaal Charles is currently healthy, and if he stays that way, Kansas City will have a chance to score some points.  The problem is that beyond Dwayne Bowe, I’m not sure who is going to catch the Ball.  Colts and Rams fans will share tales of Donnie Avery dropping balls all over the yard.  He’s a legit deep threat with pads instead of hands, but Smith doesn’t have a deep ball arm, so signing Avery was a head scratcher on a lot of levels.

Defense – The Chiefs generated an NFL low 13 takeaways, and only sacked opposing quarterbacks 27 times (roughly half the number that led the NFL).  The linebackers are solid, but the secondary beyond Brandon Flowers is suspect.  No pass rush and no turnovers make winning tough without a dynamic offense, and while the Chiefs offense will be improved, it is not dynamic.

The Chargers blew everything up after last season – in which they were perfectly mediocre scoring and allowing 350 points.  This is year one of the new regime, and while the Indianapolis Colts made that work last season, it’s not likely to be repeated in San Diego for 2013.  The biggest difference between the two teams is a quarterback as Philip Rivers’ skills are in recession while Andrew Luck walked into Colts camp secure that his physical and emotional skill set was elite.  On his best day, that wasn’t true for Rivers.

Schedule – The biggest question about the Chargers schedule is why they rated three national TV games – the first of which is next Monday night against the Houston Texans.  The Chargers are looking straight down the barrel of an 0-3 beginning to the Mike McCoy era.  Hosting Houston followed by trips to Philadelphia and Tennessee isn’t a murderer’s row of opponents, but it will be tough for the Chargers to win any of the three.

Offense – Danario Alexander is predictably injured.  A marvelously talented wide receiver, a healthy Alexander is a potential All-Pro target, but he is almost never healthy.  The Rams cut him last August because of the injuries, and the Chargers took a chance that paid off.  In just seven starts, Alexander caught 37 balls for 658 yards and seven TDs.

Rivers was bludgeoned in the pocket last year.  He’s never been mobile, but the 49 sacks he suffered were a career high, and the 311 yards lost as a result led the NFL.  When he got rid of the ball quickly, the Chargers moved the ball, and when he didn’t he felt pain.  The offensive line has been rebuilt, so who knows whether it can protect him better,  The only holdover is center Nick Hardwick.

McCoy put together a solid offense with Kyle Orton and Tim Tebow at QB, so we can assume a step in the right direction, but to whom will Rivers throw?  Alexander is out.  Eddie Royal (bruised lung) and Malcom Floyd (sprained knee) are recovering from injuries and should play in week one.  Tight end Antonio Gates is still above average, but caught less than 50 balls for the first time since his rookie season in 2003.  Keenan Allen was projected to be taken earlier than #76 in the 2013 NFL Draft, so maybe he’ll be able to contribute.

Ryan Mathews has never played a full season, but even when he played last lear, he averaged a full yard under his per carry norm from 2011.  The Chargers ranked 31st in rushing offense in 2012, scored only four rushing TDs (for the entire season!), and there is no reason for optimism that they will be more productive in 2013.

Defense – The Chargers added the no longer functional Dwight Freeney and linebacker Manti Te’o to replace aging veterans whose skills had receded.  Not sure what the Chargers believe can still be plumbed from Freeney, but different provides hope.  Eric Weddle is a solid safety and CB Derek Cox came over from Jacksonville, but that’s the end of the good news.

This is a team is total disarray.  When the most dangerous offensive player on your roster is the kicker, the team is in big trouble.  Injuries and some roster adjustments to clear cap space for 2014 have robbed the Raiders of any chance to compete.

Schedule – When you are one of the worst three teams in the NFL, who you play doesn’t matter so much.  Fortunately, they play one of the other worst teams at home in week two.  Beating the Jaguars would help keep false hope alive for another week.

Offense – Yikes.  Terrelle Pryor or Matt Flynn was the decision for new coach Dennis Allen.  He chose Pryor, and why not.  Pryor can run, and that presents a chance to move the chains when the offensive line breaks down – and the offensive line is going to break down.  As if the problems on the line weren’t already profound, LT Jared Veldheer tore his triceps muscle.  Darren McFadden’s per carry average plummeted from 5.4 in 2011 to 3.3 in 2012.  With Veldheer out, Alex Barron could be the starting left tackle.  He was a first rounder for the Rams in 2005, and was not good enough to remain on the roster of a team in the midst of a five year record of 15-65 (the worst in NFL history).  Stefan Wisniewski is an okay center, but the rest of the line is a train wreck.

Fullback Marcel Reece is a weapon out of the backfield as a receiver.  Rod Streater and Denarius Moore are less than special, and it will test the feet of Pryor to stay upright long enough to allow them to break open.

Defense – The majority of the effective parts of the Raiders pass rush are gone.  The game seems to be to try to cobble together enough to be respectable.  I’ve seen this before.  The Rams signed DBs like the formerly great Al Harris prior to the 2011 season.  The ensuing disaster led the Rams to a miserable 2-14 season – costing GM Billy Devaney and coach Steve Spagnuolo their jobs.  The Raiders will be $50 million under the cap going into 2014, but that construct will cost them dearly in 2012.  Charles Woodson was a hell of a DB back in the day, he’s going to turn 37 in October.