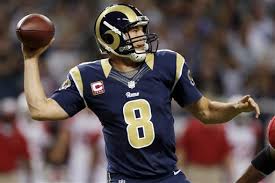 There are worse ways to start a season than by beating a division foe at home – losing comes immediately to mind – but the gap between where the Rams are and where they need to in order to get to where they believe they are going is a little wider than fans would like, and much of that gap exists between Sam Bradford and what an elite quarterback looks like.

Bradford is very accurate, but there are occasional lapses in decision making that make the Rams prone to turning the ball over.  Criticizing a guy who went 27-39 for 299, 2 TDs, and only one pick sounds strange – especially after he led the Rams to a fourth quarter TD and two field goals to come back from 11 down in the fourth quarter – but it’s accurate.

Coach Jeff Fisher is trying to build a defense stout enough that the Rams can win without a great quarterback, but that has become very difficult in this era of the NFL.  Does Bradford have the stuff to rise to the level of Joe Flacco?  Maybe.  Is the Rams defense the equal of the Ravens?  Not yet.

There is a ceiling for the defense that is a lot higher than that of Bradford.

Ask me what is wrong with Bradford, and I have trouble coming up with an answer more specific than, he just doesn’t look right back there.  The balls are on target and on time more often than not, but I feel the same way about Bradford as I did my son’s hearing when he was a baby.  I had no way of knowing whether Ryan could hear or not, but I was terrified that he couldn’t.  Sure enough, his tonsils were like ping pong balls and his adenoids were like hunks of flank steak.  Once they were removed, he was fine.  Bradford is just missing something that has nothing to do with delivering the ball or moving in the pocket.

Watching Bradford and Cardinals quarterback Carson Palmer on the field during the same game was a little surreal.  They were so similar in their behavior and production that a look at the stats seemed in order.  Again, Bradford – 27-39 for 299, 2 TDs, and a pick.  Palmer was an almost identical 26-40 for 304 yards, 2 TDs, and one pick.  The difference between the two was in the sacks.  The Rams got to Palmer four times (including one that forced a fumble), and Bradford was kept clean by an improved offensive line.

A guy who was not missing anything yesterday was defensive end Robert Quinn, who ravaged LT Levi Brown as he harassed Carson Palmer relentlessly, notching three sacks and a fumble that was recovered by follow end Chris Long.  Quinn also had three sacks against the Cardinals at the Edward Jones Dome in the 2012 season.  Michael Brockers was a force in the middle against the run, Janoris Jenkins was effective when matched up against Larry Fitzgerald with two passes defended.

On field behavior was an issue for cornerback Cortland Finnegan as he accounted for 30 of the Rams 59 penalty yards, and that won’t keep them from beating the Cardinals, but against a lesser group, discipline mayhem must be practiced.  If those penalties were a result of frustration over his poor coverage, that’s understandable.  By my count, Finnegan’s receiver was targeted seven times.  All seven resulted in receptions for a first down or touchdown.

The improvement along the offensive line didn’t have any effect of the Rams running game, which appeared to be missing Steven Jackson more than many believed it would.  Rams running backs had 22 shots at running the ball and managed only 66 yards.  Can Rams running backs get the yards needed on third down to be able to move the chains and extend drives?  Who knows, but the Rams must not think so as the handed the ball off exactly one time on third down.  That was late in the game, just prior to Greg Zuerlein’s game winning 48-yard field goal.

Early season games are tough to read.  No team knows exactly who they are yet, and that works for the good as well as the bad.  There are times when a couple of games with good results are enough to make believers out of a team, and the opposite is true too.  The Cardinals are not going to be a good team, but they didn’t know that yesterday.  The Rams are feeling pretty strong today despite an anemic running game, a pick six, a touchdown forfeited because the otherwise splendid Jared Cook didn’t secure the ball, and 4-for-11 third down efficiency.

There are many reasons to be pessimistic about the Rams next game at Atlanta this Sunday, but one excellent reason for optimism – the ability to overcome all of that to win an opener for the first time since forcing five turnovers by the Denver Broncos in 2006 to win 18-10 on six Jeff Wilkins field goals.  Bradford was a wide-eyed freshman a full year away from his first action as a collegian at Oklahoma when the Rams won that game.

Now Bradford is in his second season with the same offensive coordinator, but one game into this very important season, he appears to be the same Bradford as he has been.