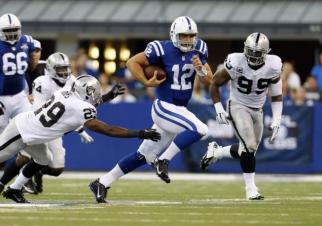 Cheesy headlines aside, the Indianapolis Colts left a lot of questions unanswered in Sunday’s season opening comeback win against the Oakland Raiders.

We still don’t know for sure what the offense is going to look like under the play calling of Pep Hamilton. We still don’t know if the offensive line will ultimately protect Andrew Luck better than last year or help produce a consistent running game. And we still don’t know how productive the defense will be. The secondary certainly played well, though, especially considering they had to cover for five to six seconds sometimes while Raiders quarterback Terrelle Pryor scrambled around.

Listening to many preseason predictions, I heard a lot of people talk about how lucky the Colts were in 2012 and how they can’t rely on winning seven games in the fourth quarter again.

Why not? Don’t we always hear how it’s the fourth quarter when quarterbacks make their money? There was Luck Sunday, putting the team on his shoulders again and orchestrating a fourth quarter comeback win for the eighth time. That’s eight times in his 17 regular season starts.

If those results applied to Drew Brees, Aaron Rodgers, Tom Brady, Peyton Manning or Ben Roethlisberger, all we would hear is the word “clutch” attached to those names. But all the Colts are is lucky?

I’m not sure there’s any QB in the league right now who had a heavier burden on his shoulders so soon in his career and produced like Luck. Luck was carrying a team and single-handedly winning games as a rookie last year with a bunch of players few casual fans – or people not named Ryan Grigson for that matter – had heard of.  Sure, others contributed. But how many of those games do the Colts win without Luck? Maybe zero. With the exception of the ageless Reggie Wayne, the roster wasn’t exactly full of fantasy league stat stuffers.

I had the pleasure of sitting at a table with Colts tight end Dwayne Allen last year at the preseason kickoff luncheon. As much as I walked away thoroughly impressed with Allen’s maturity level and charisma for a 22-year-old rookie, I remember him shaking his head in disbelief when talking about Luck’s intelligence, skill and leadership. In Allen’s words, “Andrew’s amazing.”

Yesterday on his radio show, ESPN Radio’s Colin Cowherd brought up a recent conversation he had with Trent Dilfer. Cowherd asked Dilfer how he figures out who the best quarterbacks in the league are anymore with so many racking up huge passing yards and stats. Dilfer said you figure out who the best is in crunch time when the game is on the line; two-minute drill situations. 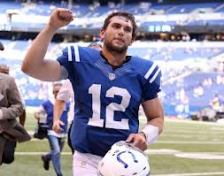 So, while the Colts still have a lot of unanswered questions, I don’t think they need to apologize for continuing to win games in the fourth quarter. Beyond the Detroit game last year (a true rabbit out of the hat trick), I can’t think of any other game where I would consider the Colts lucky to have won it. They just went out and won it when the game was on the line.

After the latest comeback win, Colts coach Chuck Pagano stated,”If there’s a minute left and we need a score, there’s no one I’d rather have under center than that guy.”

I would take that kind of Luck any day.