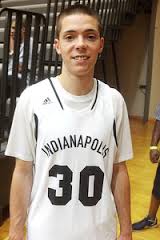 For those looking for a comparable to Bryant McIntosh, think Jake Kelly minus a couple of inches but with a better jump shot.

Watching Bryant McIntosh in July at the Adidas Invitational in Indianapolis, it was clear why Indiana State head coach was so thrilled to net a played as skilled as the senior from Greensburg.  Not only was he a good shooter as you would expect from an Indiana schoolboy, but he could move very well with the ball to create open looks.

None of that was lost on the other coaches who watched and coveted, so McIntosh made the toughest decision and phone call of his life and told Lansing that he was no longer committed to attending Indiana State.

McIntosh told Chris Hagan and I on “Ahead of the Curve” on 1070 the Fan in Indianapolis the story of how he blew up this July, made the call to Lansing, and then had a much happier conversation with Collins two months later.

McIntosh comes across in the interview as a humble and honest kid.  There are a lot of high schoolers who have trouble talking to the media.  Not McIntosh.  He’s not only thoughtful and complete in sharing his thoughts and feelings, he’s open and revealing.

A winning culture at Northwestern will be difficult to establish.  A century of mediocrity is hard to reverse, but it will be diligent and honest kids like McIntosh who will give Collins the best shot.

Listen to the interview, and tell me their won’t be part of you that will root for the Wildcats starting next fall – even against the Hoosiers and Boilermakers.