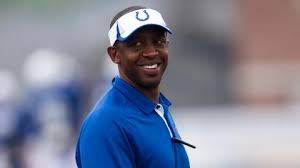 Colts OC Pep Hamilton isn’t smiling this morning, and neither is anyone else in Indianapolis.

The Colts were rolling down the field, appearing to have the number of the Miami Dolphins defense.  On the Miami 34 facing second-and-one, Colts offensive coordinator Pep Hamilton took a shot deep to Darrius Heyward-Bey down the left side followed by another throw to DHB on third-and-one.  Drive stalls, Adam Vinatieri knocks a long field goal attempt off the upright, and the offense left the field with zero points.

There were plenty of other reasons for the Colts losing yesterday – including a strange illegal shift penalty against Reggie Wayne that turned an Andrew Luck touchdown strike to tight end Coby Fleener into a Vinatieri chip shot.  Seven points becoming three is a pretty good explanation for a four-point loss.

So is a defense that showed up at 1:30p for a 1p kick, so it isn’t all on Hamilton’s calls and Luck’s execution, but it’s what kept ringing in my head as the game unfolded.

With a 16-game season, holding serve at home against mediocrity is essential, especially with a trip to San Francisco looming this weekend.  The 49ers are not likely to be hospitable hosts as they lost badly against the Seattle Seahawks in a divisional matchup that is likely to be of huge importance as the teams who are said to be the two best in the NFL will battle for the NFC West crown.  With 1-2 staring the Colts in the eye, this game needed to be successfully negotiated.

The Colts took the opening kick, and effectively moved the ball chunk by chunk into Dolphins territory – first a gain of three on a Reggie Wayne catch, then an Ahmad Bradshaw nine-yard run, followed by a five-yard reception by Stanley Havili, a 20-yard catch by T.Y. Hilton, and finally another nine-yard gashing by Bradshaw.  Then, the Colts got greedy without reason, and the Dolphins responded with a six play, 58-yard drive that looked more like part of a non-contact workout at Colts Camp than a September Sunday effort in front of 65,406.

It appeared that the Colts had so many ways they could advance the ball successfully that offensive coordinator Pep Hamilton had trouble choosing, and when he chose the deep ball, the result was to put the Colts in a tough spot.  There is no telling how the game might have unfolded had the Colts continued that opening drive that looked so promising until reaching the end zone, but those risks on second and third and one sure appeared to be unnecessary.

Fans don’t know exactly what workload Bradshaw’s foot injury allows, but to have Donald Brown on the field late in the game when it was a virtual certainty that the Dolphins would blitz and Bradshaw is acknowledged as the best blocking back in the NFL was strange and resulted in a Philip Wheeler sack of Luck that effectively ended the game.  I kept thinking of the great highlight clip of Peyton Manning screaming “Goddammit, Donald!” a couple of years ago when Brown whiffed on a block that forced Manning to run for his life as Brown was embarrassed by Wheeler.

Former NFL head coach and master defensive coordinator Rick Venturi says a lot of smart things, and one he credits to his dad who was a hall of fame coach in Illinois, “First, you have to outcoach the fans.”  There were situations yesterday when Hamilton did not outcoach the fans.

There is no question that there were other issues that caused the Colts loss that dropped their record to 1-1, but the meandering and unsure offensive gameplan was one of them.

Just as surely as a quarterback needs time to adapt to the unique challenges presented by the NFL compared to those faced in college, so it will be with Hamilton as an offensive coordinator.  He’s done time with NFL teams as a quarterbacks and wide receivers coach, but this is a little bit different as the architect of the offense.

Having a quarterback is talented as Luck presents challenges too.  He can do it all, so the difficulty becomes in selecting which of those things to ask of him – throw deep, throw short, roll him out, play action, or turn him loose on a designed run or two.

The loss hurts today for fans, but the potential exists for it to be a massive regret come December, and as you look down the schedule, losing games that are very winnable have a serious price.  Yesterday’s game could keep the Colts out of the playoffs, and those calls on second and then third-and-one early in the first quarter might stand as the difference between the Colts advancing to the playoffs and going home early.