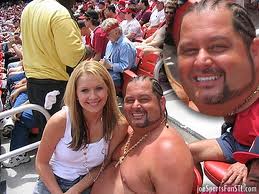 This picture of a fan and his girlfriend at Busch Stadium was used in a St. Louis webstie to describe what a “Hoosier” is.

When I moved to St. Louis a couple of years ago, I was unaware that people in Missouri use “Hoosier” as a derisive and mocking term to describe white trash or a hayseed.  Some there aren’t even aware that Hoosiers is also the name for those from Indiana or the nickname of the teams and students from Indiana University.

I learned it very quickly, and loathed it.  I’m not originally from Indiana, but the “Wow, he’s so Hooz (prounounced like “rouge”) got old in a hurry.

Hopefully, this weekend, people from Missouri find out exactly what a Hoosier is.  I try not to get emotionally involved in contests between two teams because it tends to cloud my vision and keeps me from judging play based upon a viewpoint that is just.

I’m suspending that emotional boycott for this one game.  I want the Hoosiers to beat the living hell out of the Missouri Tigers this Saturday night for a variety of reasons, but chief among them is the oddly haughty attitude people in the Show Me State display toward those from Indiana.

If you think the recent dust-up over the use of Redskins by the NFL team based in Washington DC shows an ugly side to how callous Americans are in depicting Native Americans, they have nothing on Missourians’ disdain for all things from Indiana.

I don’t know whether Kevin Wilson is as blissfully unaware of the lack of respect people in Missouri reserve for Hoosiers as I was, but his assessment of Missouri’s strengths and coaching staff was borderline reverent.  That’s how Hoosiers act.  They give credit where credit is due, despite the Tigers 5-7 record last season.

I’m sure Mizzou’s Gary Pinkel will blow kisses toward Indiana and Wilson during his remarks to the media, but if the reality mirrors the perception within a few miles of the Ozarks, they will walk into Memorial Stadium without believing for a second that Indiana has any chance to hold serve at home.

Yes, Mizzou has James Franklin, which could work in Indiana’s favor, and the supremely talented and enabled Dorial Green -Beckham.  James and DGB, come meet the Hoosiers.  I hope your stay is miserable.