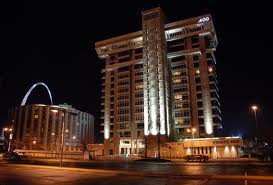 Sure, I lived in this building in St. Louis, but it was never home.

Many of the people at 101ESPN were wonderful, and I’m looking forward to seeing many of them this weekend, but home is home, and you don’t mess with home.

I made some mistakes both in how I moved to St. Louis and in how I lived there.  They might be instructive for others who contemplate a similar move, so I thought the lessons that I learned might be worth listing.

1 – When one moves, everyone moves – The first lesson I learned from my Dad when I was 14, and for financial reasons, I ignored it.  Trying to outsmart life is always a mistake, and money is so often the motivation.  When I was offered the job in St. Louis, I told Julie and we decided to to sell the house and move together.  Then a reasonable alternative was proposed by Julie’s boss and longtime family friend, and we decided that Julie could continue to live here, she would drive the St. Louis on the weekends, and we would be a two income/two home family.  On paper, it looks great.  I’ve seen other families torn apart by doing this, and it’s to Julie’s credit that after almost two years, we were still solid.  My Dad accepted a job offer when I was in the eighth grade that took us from our hometown, and I was more than a little pissed for a while.  It was the right call because if family isn’t the top priority, it won’t be around for long.

2 – Understand where home is – The second to last straw in my decision to return to Indianapolis was during the NFL Combine.  I took the week off to come back to help two members of the 101ESPN staff get some things done in Indianapolis.  Tony Softli would work the Combine, and Bob Ramsey was to call the Saint Louis University vs. Butler game Thursday.  The guys didn’t really need my help, but I enjoyed showing off the Emmis Building where they would use a studio on several occasions.  When I brought them in, people were very friendly, and reminded me that this is home.  Hugs mean something to me, as silly as that sounds, and I got a lot of hugs from old friends and co-workers.  Walking around the halls, I remember thinking, “I haven’t worked here is three years, and people treat me like an old friend.  After almost two years in St. Louis, there are still pockets of people who wished I had never shown up.”  Many of the people in St. Louis were wonderful and generous, but others were not.  That week, it dawned on me that Indy is home.

3 – Shoot a hostage – Everyone, and I mean everyone, with whom I discussed managerial strategy prior to leaving Indy for St. Louis told me the first thing to I should do is fire someone.  There is a weasel on every staff, and that person needs to be found and dispatched.  I thought that was a bad attitude to have walking into a building.  If I couldn’t be a manager who served as an ambassador for each member of his staff until he exhausted all resources and options before taking the final step, what was the point in moving?  While the humane thing to do, it was a waste of time.  I was still smarting enough from my own firing at Emmis that I didn’t want to bring that level of unpleasantness to somebody else – at least not until I was sure.  I knew exactly who the guy I needed to punt was from the first meeting, and should have acted immediately.  If you need any help figuring out who to fire if you are in a similar position, the first person who welcomes you once you walk into your office on the first day you are on the job is a great bet.

4 – Jump into the pool, don’t dip a toe in – I worked for two guys as PDs who moved to Indianapolis in very different ways.  Bobby Hatfield did the weekend commuter thing from Columbus, Ohio.  Jon Quick bought a house immediately, and moved his family when he began working for Emmis.  Bobby made it almost 10 months, and Jon lasted 12 years.  There is a correlation.  This is similar to tip #1, but it involves making the call to buy a house immediately, which Jon did.  I thought he was a madman given Bobby’s short tenure, and the abrupt departure of Ed Lennon within 10 weeks of Emmis buying the station.  When the seller found out what Jon did for a living, he bumped the earnest money requirement.  Jon and his family made Indy home very quickly, and that’s the way to do it.  I lived in a hotel for two months, and then we rented an apartment downtown.  If you aren’t willing to buy a house immediately, don’t make the move.

5 – Release the past – While past work experiences helped mold me into the person hired in St. Louis, bringing them into meetings as alternative strategies is a mistake.  Nothing drove me crazier than people coming into Emmis and talking about what they did here or there.  It conveyed an arrogance, as though we had been incapable of seeing those alternatives as options prior to their arrival.  I caught myself doing that a lot in St. Louis, and should have seen that as evidence of discomfort.  We had a strategist who would come in every now and again to help us build plans, and every time I walked into those meetings, I wished that I was headed into the kind of meetings we used to have at Emmis with Gerry Tabio.  That attitude did not help me take full advantage of what these meetings offered.

6 – Negotiate a user friendly lease – It cost us nearly eight grand to break our lease.  That is the kind of dumbass financial event that leaves a mark.  I was pretty smart getting some concessions when I moved in, but should have been much more aware of the cost of moving out – especially when we renewed after the first 12-months.

Distance is important in assessing the pros and cons of a move, and six months out, I have a much clearer view of what I did well and what I did poorly.  I have no regrets – either in moving to St. Louis (to the extent I did) or in leaving.  I left St. Louis with more friends than I had when I arrived, came back to a city that I had learned was home, and knew exactly what I was supposed to do and how to do it.

I’m more fulfilled than I have ever been – writing and hosting radio are endlessly challenging.  Talking about why things happen in sports, searching for the truth, and telling the unique stories of the athletes makes me happy.  As in sports, perfect is a goal that can never be realized, but striving for it is a daily motivation.

Julie is happier than ever.  Ryan is in law school.  The sun comes up every morning presenting new challenges.