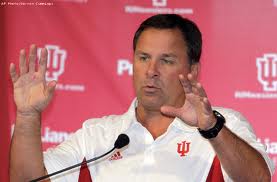 Yesterday, as I watched Nebraska head football coach Bo Pelini whine about Tommie Frazier and then excoriate Cornhuskers fans from audio recorded two years ago, I thought about the way I used to feel about Indiana head coach Kevin Wilson.

When he was first introduced as the head coach almost three years ago, I thought Wilson would likely flame out or implode as coach.  He seemed too tightly wound, and too demanding, as though demanding victory could cause winning.  If only it was that easy.

After a two-year sabbatical from day-to-day contact with the Hoosiers program, I returned to Bloomington for the preseason media event where Wilson spoke about the state of the program and his third season leading Indiana Football.

I waited for the petulant side of Wilson to appear.  Surely, the guy with such high expectations for himself and the program would be wearing thin after a combined 5-19 record in his two seasons at IU, and he would likely say something in anger that would be pretty interesting.

Aside from a brief expression of dissatisfaction of the attendance at the 2012 Wisconsin game, he was everything I didn’t expect.  There was a confidence and patience to Wilson that was nowhere near the surface of his behavior when he first arrived in Bloomington.  A spirit of cooperation and fun had somehow found their way into the core of Wilson’s bearing that gave him the aura of an excellent leader.

I didn’t believe what I heard, so I wrote about the mini-rant about the lack of fans at the Wisconsin game.  Since then, I have been to every game, postgame interview, and Monday media gathering.  If anything, Wilson has taken an additional step or two toward being the coach athletics director Fred Glass says he knew he was going to be 15 minutes after meeting Wilson.

Coaches at all levels are evaluated based upon wins and losses, but there is a behavior that can help players perform to the best of their ability, and not only does Wilson show it, his players echo it.

Wilson came to Indiana as a guy who could build an offense and a make a quarterback shine.  Every time Hoosiers QB Nate Sudfeld talks, I listen because the best way to evaluate a football coach is through the level of play and confidence of his quarterback.

Sudfeld not only says all the right things, but he does them too.

There were stories from very solid sources about Wilson’s behavior that provided reason for worry that eventually he would blow his stack and self-immolate as it appears Pelini has, but those issues appear to be in his past.

Building a culture in a team that has been in operation for better than a century is hard work and requires incredible patience.  It’s not easy to take pleasure in the small victories that will hopefully lead to on field wins, but it appears that Wilson is proud of the small wins, and secure in the knowledge that those small wins provide the only path to the victories he, his team, and IU fans crave.

Wilson talks about perfection as a goal, but not a possibility.  He says that the best he can hope for is that players do the right thing, and learn from the mistakes.  He is never too generous in praise or too damning in criticism – at least not publicly.  The self-indulgences so routinely apparent in coaches (ill-temper, public venting, entertaining but harmful rhetoric) seems to have been exorcised from his being, and what’s left appears to be a damn good football coach.  He takes risks that show confidence in his team.  That’s what good leaders do.

There was a clear disconnect between the players and Wilson early on.  As the Hoosiers would score and the offense came off the field in 2011, Wilson would reach out to slap the hands of his players.  More often than not, they glided by without any acknowledgement that Wilson’s outstretched hand even existed.  Not anymore.

The key to being a good leader has less to do with great strategy than getting the most out of employees/staff/team, and it appears that not only is Wilson more successful in getting solid recruits to agree to come to Bloomington, but now is getting a higher level of play out of them.

Indiana Football has been a train wreck for 20 years, meaning there is not a single student at Indiana University who can remember when the football team was any good.  That kind of legacy leaves a mark on a program, and winning fans in large enough number to fill Memorial Stadium is still a far-off dream, but for the first time in a long time, there appears to be a light at the end of the tunnel that is not an oncoming locomotive.

Unless there is an unforeseeable reversal in Wilson’s demeanor, the biggest problem for Indiana Football is not going to come from a Pelini-esque outburst, it will be how to keep him in Bloomington at the end of his seven-year contract.