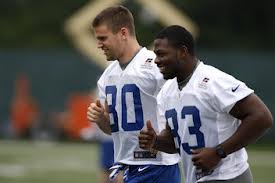 The Colts looked set with two outstanding young tight ends as training camp began. Now, half of that duo is on the shelf.

The Indianapolis Colts weren’t an 11-5 team last year because of the play of their left guard, running back, and tight end, and whatever record they earn in 2013 won’t be because of season ending injuries to Donald Thomas, Vick Ballard, and Dwayne Allen.

They are the gallbladder, spleen, and second kidney of the Colts offense – great to have around, but the host body can live a normal life without them.  For lovers of continued anatomical metaphors, Reggie Wayne is a lung, Coby Fleener is the other kidney, Anthony Castonzo is the pancreas, and Gosder Cherilus is the stomach.  Andrew Luck is both the brain and heart.

The defense?  They are the digestive system because they need to be tough enough to eat nails and crap steel.  The balls belong to the front office because Ryan Grigson spends a lot of money, and if that cash doesn’t buy wins, he’ll hear about it on Twitter from the guy writing those massive checks.

What does any of that mean for the 2013 Colts?  They are in a tough spot if one more offensive player goes down.  That goes for anyone – not just the starters.

Ranking the importance of the losses on a 1-10 scale is not difficult, but has less to do with the overall talent of the lost player than the gap between the injured and the healthy.

Dwayne Allen (7.5) – Coby Fleener and Dominique Jones are able to block and catch, but if either goes down, that would leave Cathedral High School product Jack Doyle and practice squad member Justice Cunningham to man that post.  We haven’t seen enough of Jones to know exactly how good he is, but in camp he appeared solid.  The Patriots have lost Rob Gronkowski and Aaron Hernandez, and are 2-0 with Michael Hoomanawanui, Matt Mulligan, and Zach Sudfeld.  Allen is a unique athlete and personality whose assets cannot be easily replaced.

Guard Donald Thomas (6) – Big free agent get for the Colts who was needed to shore up their offensive line, and with him out for the season with a torn quad, the line has a very similar look to the group that allowed the Franchise take 41 sacks and more than 120 hits (more than any other QB in the NFL by nearly 30).  Third round pick Hugh Thornton should be ready to go.  He was the sixth guard taken, and the sixth best OG in all of college football should be able to exist on the field without causing catastrophic results.

Vick Ballard (3) – As long as Ahmad Bradshaw stays healthy, the running game shouldn’t miss a beat.  He’s an excellent blocker, and as we saw Sunday against the Dolphins, picking up a blitz is not at the top of Donald Brown’s list of talents.  Bradshaw staying healthy is a crap shoot.  In his six previous seasons, Bradshaw has played in every game just one time.

Right now, the Colts are still able to operate because Luck and a bunch of electrical workers could beat Jacksonville twice, and a fully healthy squad would have a tough time with a very angry San Francisco 49ers squad embarrassed in Seattle Sunday night..

The first game that might be effected by the injuries will be against Seattle at Lucas Oil Stadium.  The Seahawks are definitely a championship level team at home (8-0) and very beatable (4-6 including two playoff games on the road).

The Colts are going to be just fine as long as the injury gods deem that the Colts offense has suffered enough.