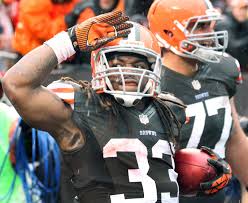 Trent Richardson waves so long to Cleveland, and hello to Indianapolis.

Two hours after writing how the Colts were going to be just fine dealing with season ending injuries to Vick Ballard, Donald Thomas, and Dwayne Allen, general manager Ryan Grigson showed his disdain for my opinion by swapping the team’s first rounder in next year’s draft for 2012 #3 overall pick Trent Richardson.

In the same post where I wrote that Ballard wouldn’t me missed, I wrote that if the Colts were an anatomically correct doll, Grigson would be the stones.  About that, I was right.  This trade reveals stones that would require a Ford F150 to haul.

If the Colts spiral south in the very strange and hard to predict world of the NFL, that pick could be a massive asset in exchange for a running back who seemingly has underperformed in 18 NFL games.  Richardson’s per carry average with the Browns is a very ordinary 3.5 years.

That’s not nearly the full story about the former ‘Bama stud.

Let’s get all the bad news out of the way – Richardson graded as 61st of 63 running backs in pass blocking efficiency, according to Pro Football Focus.

The good news is that Richardson is really good at making tacklers miss.  He is an exceptionally elusive back.  He’s not Adrian Peterson, but he’s tied for the NFL lead in causing missed tackles.

Richardson is kind of a strange duck in that he causes missed tackles, but in almost 300 attempts Richardson has never broken a run for more than 32 yards.  His long gain this season in 31 carries is 10 yards.  The half full view is that Richardson is a consistent gainer of less than ten yards, rather than a Peterson who will run for 170 yards in 20 attempts because two of his runs totaled 145 yards.

To this point in his career, Richardson has been a singles hitter, but string together enough singles, and the runs come.

Another strength is Richardson’s ability to catch the ball out of the backfield.  He has good hands and also led the NFL in causing missed tackles after the catch last season.

If Richardson’s poor blocking scores are removed from the equation, he’s a top 12 back despite running behind two of the worst run blocking tackles in football with the Browns.

Richardson is a significant upgrade from Ballard, as you might guess given their respective draft positions – Richardson at #3 and Ballard at #170 – and it would seem Richardson will slide into the Ballard side of the two-headed monster in the backfield very neatly.  It should be a good fit as Richardson and Ballard are almost exactly the same size at 5’9 1/2″ and 225 lbs.

If the Colts finish 8-8 or better, this will be a hell of a good deal.  If the Colts go in the tank and net a top ten draft position, not such a great deal.

One thing is for sure, the 2014 first round pick for the Colts is not going to move the sticks, punch it in from inside the five, or be an asset toward a win of any kind in 2013, and Richardson just turned 22, so there is plenty of wear left on those tires.

As far as the poor grades for pass protection, Richardson was graded as a very good blocker coming out of Alabama. There is a chance the poor assessment during his time with the Browns was due to poor schemes or inadequate work by the guys up front paid to keep Brandon Weeden upright.

Grigson hasn’t been in the Colts GM chair very long, but with this trade he leaves no doubt that he will pull the trigger to improve his team right now.

The Browns get to continue to look toward the future as an NFL version of the Chicago Cubs for whom “win now” appears an impossibility, and the Colts get a running back who erases any concern about depth at one of the three positions where injuries have ravaged their depth.