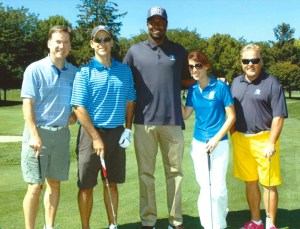 After playing in a couple of hundred corporate golf outings, I can tell you you thing – the companies that sweat the details make the outings much more relaxed and enjoyable for the participants.

Fun golf outing = oncourt success is a simplistic equation that defies a little bit of logic.  After all, my draining a couple of putts has nothing to do with Paul George knocking down shots, but the traits needed to have a golf outing go off without a hitch are very similar to those that govern the culture of a successful company.

The devil is in the details, and those who can execute to a high level of detail that feeds, bevertizes (a perfect term borrowed from former St. Louis Cardinal and current radio host Chris Duncan), and entertains 18,000 at Bankers Life Fieldhouse should be able to do the same for 132 golfer – and vice versa.

Sure, the weather was gorgeous.  Not sure a nicer day could have been ordered, and while weather is a detail that can’t be managed, the Pacers staff got the stuff they could control just right.

One thing I very selfishly liked was that the gifts everyone received were excellent, while the prizes for winners were okay. With 33 foursomes playing, to give the winning group – undoubtedly loaded with ringers – a golf trip to Ireland does nothing but piss off the other 32 teams.

Our bounty just for showing up – a pair of very sweet Pacers golf shoes from Adidas.  We got to pick the style, and they will be shipped to us in a few weeks.  I love cool golf shoes, and am not quite as enthusiastic about watching a foursome better at stocking a team win a golf trip.

The food was excellent, the Pacemates were everywhere, and the Pacers themselves were engaging and smiling.  When a head cover of mine fell off, Roy Hibbert retrieved it and drove it back to me.  Then, Roy hit a long putt for us, and gave us a solid line.

Nothing worse than hearing the tales of another man’s round of golf, unless it’s the stories from Eddie White about his golf outings with sports celebrities, so let’s get to what parallels we can draw from the event yesterday, and the season to come.

I’m not sure whether the Pacers players needed to be ordered to show up, but it sure seemed like they enjoyed themselves – and each other.  Camaraderie is very difficult to fake, so I trust that the players get along as well as it seemed they did.

New guys like Luis Scola, Chris Copeland, Solomon Hill, and Donald Sloan spoke before the event, and Paul George, Hibbert, and Lance Stephenson socialized after.  As telling as the way the players enjoyed each other was the genuine fun the front office staff seemed to have.  And that I know cannot be faked.

And is there anything about being the Pacers head coach that Frank Vogel doesn’t just love?  He may be the most normal coach I have ever met, counting high school coaches.  He appears to be embracing every moment of this ride, and I love it.  So many coaches put themselves through such a relentless ringer that they come out completely wasted.  There is no doubt that Vogel works incredibly hard as a road to where he is doesn’t exist without being willing to work 18 hour days, but he seems to be a very normal person.

The Pacers may have lucked into hiring the absolute perfect guy to coach a very unique team of relentlessly good guys.

There was a time when this golf outing seemed like work for the Pacers.  Anyone who has ever taken part in organizing a golf outing knows it’s very difficult to get right, and the only road to guests enjoying themselves is through hard work, but the staff enjoying themselves and each other might be the most important detail of all.

The behavior of the staff that made it seem like great fun to be a part of that team, and when the Pacers have been successful, that vibe was clearly present.  When the Pacers had trouble winning or comporting themselves in a responsible way, the golf outing was a trip to the dentist.

Yesterday, the Pacers comported themselves as a company clearly excited about being a part of a team on the rise – a group that both on the court and in the conference room that can operate at a high level.

Sure, the golf was fun, but I was more interested in whether it was fun for everyone else because that’s better at predicting playoff success as the Farmer’s Almanac is at predicting the weather.

Congratulations to Kevin Bower, Krissy Myers, and Megan Knapp for getting the small stuff exactly right.  When the small stuff is right, the big things being just so is a given.