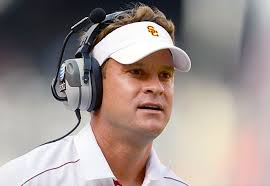 No word on whether former USC coach Lane Kiffin was told to turn in his visor as he was escorted from the team bus.

Defending former USC football coach Lane Kiffin is impossible.  His ability to get jobs is his greatest skill.  As a coach, he has always been reported to be an overmatched weasel filled to his visor with hubris.

Only the assumed lunacy of Oakland Raiders owner Al Davis’s rant about Kiffin being a liar kept the stink of his departure there from making him one of the youngest head coaches in any level of football history to render himself unhirable.

He caught on quickly at Tennessee, and then quickly ran out 14 months later when USC came knocking.

And last night, the environment at Southern Cal had so horribly deteriorated that athletic director Pat Haden couldn’t wait until this morning to pull the trigger on his embattled coach.

The decision to punt Kiffin was reportedly made during a 28-0 run during the third quarter of Arizona State’s 62-41 win over the Trojans, and it was executed by pulling Kiffin off the team bus after the charter had landed back in Los Angeles.

Kiffin has always appeared to be the kind of weasel that has no business leading young men onto the football field or into adulthood.  His arrogance was palpable, even in brief soundbites.

Haden must not have liked anything about the coach to not give himself a night to take a deep breath, gather his human resources crew, and execute a plan in the termination of the university’s highest profile employee.

What tends to happen when a weasel is fired is that he calls an attorney, and begins legal proceedings that will motivate the employer to cough up a few extra bucks.  Haden was sufficiently eager to pull the trigger that he couldn’t wait until Kiffin returned to his office.

Without question, there is a part of Kiffin’s personality that rubs people the wrong way.  There are two kinds of people in the world – the Omegas and the Delts.  This goes back to the 1978 film “Animal House,” where the Omegas were arrogant trust fund douchebags, and the Delts lived lives of good humor that encouraged street justice.

Kiffin would have doubtless recruited by Greg Marmalard and Douglas C. Niedermeyer to become an Omaga.  The Delts would have seen through his obvious lack of character, and tormented him mercilessly.

Haden must not have a serious aversion to Omega types.

Maybe Kiffin is such a substantial weasel that any method of termination would have motivated legal action, so it didn’t matter how or when Haden pulled the trigger, but prudence is always better for administrators, and that’s why so many attorneys have become valued athletic directors.

Lawyers know how and when to take a deep breath, dot I’s and cross T’s.  Haden satisfied his basic competitive desire to quickly identify a problem and correct it as quickly as possible.  Many times, that level of impetuousness brings with it a new set of problems, and that may wind up being Kiffin’s most damaging legacy at USC.

That Kiffin would be fired was ensured the minute he was hired, but the way it was handled might cause dominos to fall that have negative ramifications for Haden too.