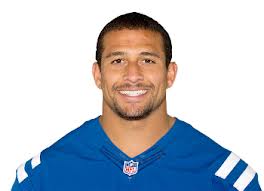 Donald Brown has been quietly effective in 2013, and the Colts have used him well.

It was virtually a foregone conclusion that the Colts team that beat a good 49ers team easily in Candlestick would wallop the Jaguars in Jacksonville, but the Colts don’t win a lot of road games by 34 or more points.

The last time the Colts put an ass-whooping on a host was in St. Louis on October 25, 2009 against a historically bad Rams team.  They won 49-14.  That Colts team punched a ticket three months later for the Super Bowl.

Prior to that, you have to look back 10 years and one day ago in New Orleans, during a Peyton Manning homecoming that saw the great conductor complete 20-25 passes for 314 yards, six touchdowns, and one of his three full game efforts with a perfect 158.3 quarterback rating.

Watching the game, it was hard to tell whether the Colts are really good, the Jags are terrible, or there was a very pleasant combination of the two.

Andrew Luck was his ordinary self under center today, going 22-36 for 260 yards, two TDs, and a pick.  His counterpart was as awful as Jacksonville fans have come to expect.  Blaine Gabbert was 17-32 for 179, and three picks – one of which was returned for a touchdown by cornerback Darius Butler.

Just as impressive was the unholy terror Robert Mathis unleashed on Gabbert.  All of his five tackles were for loss, and three were sacks.

It’s tough to compete in the NFL with a no facet offense that threw for less than 200 yards and ran for 40.  Maurice Jones-Drew averaged 1.8 yards per carry with a long of six.  That’s a hell of a difference from what the Colts used to endure from Jones-Drew and the Jags.  Back in 2006, Jones-Drew ran for 166 yards, Fred Taylor for an additional 131, and Alvin Pearman enjoyed the best day of his career with another 71 yards.

Click here to learn about Chef JJ, and the best food in Indianapolis

The Colts won the Super Bowl that ended that season, but that game still sticks in the minds over many as a uniquely miserable effort.

Donald Brown had an interesting day as he led the charge with 65 yards rushing on only three carries.  For the season, Brown has carried the ball 13 times for 120 yards.  Brown is one of those weird guys who fans never seem to enjoy.  Ask a Colts fan today about what they think of when Brown is mentioned, and the majority will talk about the missed blitz pickup that allowed Philip Wheeler to assault Luck late in the loss against the Dolphins.  Never mind the efficient running.  He almost got our Andrew killed.

That’s understandable as Brown is unlikely to win the Colts a Super Bowl, but Luck will have to if the Colts are to hoist a baby brother for the Super Bowl Champ banner currently flapping at Lucas Oil Stadium.

I wrote this who post without mentioning the unbelievable consistent and splendid Reggie Wayne, who caught five of Luck’s passes for 100 yards.  I can’t recall a hall of fame type receiver whose ratio of excellence to recognition has been higher.  There is never a week when asking what Wayne did is the first question for Colts fans, but there have been very few in NFL history who have done it better.

Wayne is on pace for 88 catches, 1,200 yards, and eight TDs.  Sometime next season, Wayne will pass Marvin Harrison for the #3 spot all-time in receptions.  That will give the Colts two of the top for all-time, and the top two in receivers who spent their entire careers with one team.

It’s odd to think of Wayne as a statue guy, but he absolutely is.

The Colts have never combined to win consecutive road games by a total of 54 points, but what these two contests will represent in the end will be determined by what happens from this point forward.  Much as the gashing by the Jags in 2006 meant nothing as the Colts marched to their only Indianapolis World Championship, these wins won’t keep them from losing down the road.

Being 3-1 during the first quarter of the season is all a reasonable fan might have hoped for, and the schedule gets no easier moving forward.

Next up is a home game against the Seattle Seahawks, who beat the Houston Texans today in overtime, and then they travel to San Diego for a winnable game against the Chargers.  And right before the bye week, Peyton Manning returns to the building that would never have been built without his excellence from 1998-2010.

Given the rash of injuries, Chuck Pagano should feel very good about his team as the Colts will end today tied with the resurgent Tennessee Titans at 3-1 at worst.