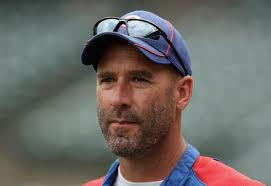 If you were choosing a manager based upon ability to grow a full beard in 15 minutes, Dale Sveum would be the only choice.

Every major league baseball manager knows that he will be fired before he agrees to take the job, and with the Chicago Cubs, they know that the chances of lasting five full seasons are almost nil.

Only one manager in the last half century has avoided being gassed by the end of his fifth season leading the Cubs, and that guy, Leo Durocher was told to pack his things just over 40 years ago.

The Cubs won’t fire Sveum because he is a bad manager, although the team clearly quit this weekend in St. Louis, scoring in only one of the 27 innings they played.  Sveum will be replaced for marketing reasons.

Season ticket holders need a change in the narrative – a reason for hope – to prompt renewals, and hiring a big name manager is a cheaper alternative to dropping massive long-term dough in the lap of a free agent like Robinson Cano.

The Cubs need a billboard worthy asset, and no one on the roster qualifies.  As much as owner Tom Ricketts enjoys seeing his mug on TV and fancies himself a modern day Bill Veeck, unless he wants vandals adding horns to his forehead, he should stay off billboards.

Sveum is a lot of things, but an enthusiastic and compelling reason to attend Cubs games is not among them.

It’s a shame that Sveum will be evicted from a position that came with a guarantee of misery, and a likely early death.  Whether he might be able to lead a team to more than 70 years, we will likely never know.  Of the 10 men who preceded Sveum as manager of the Cubs at the beginning of a season, only two have ever managed again – Dusty Baker and Jim Riggleman.

For Jim Frey, Gene Michael, Don Zimmer, Jim Essian, Tom Trebelhorn, Jim Lefebvre (who mopped up the 1999 season for the Brewers), Lou Piniella, and Mike Quade, the Cubs were the end of the line.  Although some became general managers, most receded into anonymous roles with a string of other teams.

The sad truth is that for most, accepting the job of managing the Cubs is a career death sentence.  Sveum wasn’t hired to win, he was brought in to hold the spot until the Cubs decided it was time to become competitive.  That day hasn’t come yet, but the Cubs need a marketable face without overcommitting more of the Ricketts family fortune to a player that won’t be worthy of it in three years.

While under different ownership, the Cubs did this repeatedly with disastrous results.

People in the media have bought into the bill of goods that the Cubs are three years from being a player in the National League Central, so fans can look forward to 2016, I suppose.

Coming of the worst three year run in the history of one of the least successful teams in the history of sport, selling tickets is going to be a challenge.  The firing of Sveum, and the hire of a manager like Joe Girardi will give the ticket office something positive to tell fans as they continue the daily death march of calling season ticket holders to talk renewal at roughly the same rate.

The Cubs have no chance to compete with the Pirates, Reds, or Cardinals in 2014, so it’s logical to wonder why a guy like Girardi would agree to lead a guaranteed loser.

Tearing down a team is the easy part, and the Ricketts regime has performed well in selling off parts.  Now, the second step begins – acquiring and developing talent who can win at the major league level.

Sveum won’t be a part of those plans, whether he is canned today or not.

One thought on “Chicago Cubs Fire Dale Sveum, for All the Wrong Reasons”