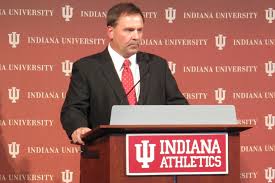 The day Kevin Wilson was announced as the next head coach at Indiana, he spoke like everyone else has of changing the tradition. Today, he proved his vision to be accurate.

For almost three years, Indiana football coach Kevin Wilson has been telling fans, players, alums, boosters, and media about his methodology in building a winning tradition at a place that hasn’t had much of one since Bo McMillan prowled the sidelines of old 10th Street Stadium.

There was a brief era of wondrous and thrilling trips to the Peach Bowl in the late 1980s and early 1990s under the great Bill Mallory, but that seems enough like a dream that I’m not sure if Anthony Thompson is real or a magnificent apparition.

Wilson is a grown man, but there is just no way a little doubt didn’t creep into his psyche during the quiet moments everyone has when there is nothing to do but wonder whether the mounting list of losses begin to form the picture of a failure.  There is an interesting moment that comes after you get the job of your dreams – that instant before the success comes when you doubt you are worthy of it.

That’s when you either hide under your desk and hope no one notices you are gone, or man up, double down on yourself, and ride the wave.  For some, the wave carries you safely to the beach, and for others jagged rocks await.  Today, Wilson got to the beach.

On Monday, Wilson spoke of coaching his team as though they are winners despite having lost to Missouri before the bye week.  That’s called pushing a tall stack into the middle of the table, and praying that the kids whose actions determine the fate of a coach can rally and find a way to validate his faith in their talent and heart.  I sat there watching him say it, “We coached them as winners last week.”  There was a calm to Wilson that was impossible not to admire, and I thought “either that man has lost his marbles, or he knows something we don’t see yet.”  I’m glad his marbles are intact.

Click here to learn about the best dentist in Indiana (an IU Dental School grad!)

It’s funny what a win can do for a program.  Wilson’s contemporary who runs the basketball program across the parking lot for Memorial Stadium had his watershed moment in late 2011 when Christian Watford hit a buzzer beating three-pointer to beat Kentucky.  That moment changed everything for Indiana Basketball and Tom Crean, and so did this fourth quarter beatdown of a good team.

Rick Venturi was a football coach in the Big Ten and NFL for over 40 years, and he is fond of saying “leadership is making others believe without evidence.”  After the decline of the Hoosiers program in the mid-1990s, the failed regimes of Cam Cameron and Gerry DiNardo, and tragic death of Terry Hoeppner, and the mostly mediocre years with Bill Lynch at the helm, people associated one word with IU football – losing.

There was absolutely no evidence at all that Wilson would be able to climb the mountain inch by inch to where the inspiration of hope seemed like anything but the continuation of a longstanding and cruel hoax.  Wilson stayed the course, learned from his mistakes, and has found a way to put together a team capable of an upset the likes of which has not been enjoyed in Bloomington in a long, long time.

Wilson knows his work is not done.  The Hoosiers are five games into what he hopes will be a 13 or 14 game season (I know that 14 games is absurd, but so was Indiana -20), and the next test is Michigan State, but because of a win that was unexpected by so many, so much can now be dreamed.

This win wasn’t just the result of years of work by Wilson and his staff, it was earned through the efforts of talented players.  The offense is filled with weapons quarterback Nate Sudfeld can access.  Cody Latimer, Kofi Hughes, Shane Wynn, Ted Bolser, Tevon Coleman, and Stephen Houston are a special combination of dynamic assets.

For those waiting for the Hoosiers to show they can win before climbing on board the bandwagon, today’s dominating finish should provide an adequate push.

Almost certainly for the fans, the math will start to calculate the needs for bowl eligibility.  It’s not complicated.  The Hoosiers are 3-2.  They need three wins.  With road games against Michigan State, Michigan, Wisconsin, and Ohio State, and home games versus Minnesota, Illinois, and Purdue, it’s not hard to see a path to get there, or even 7-5.

Even after a win against a legendary program, Indiana is still Indiana, but today the meaning shifted.  Wilson saw it coming, and today fans did too.