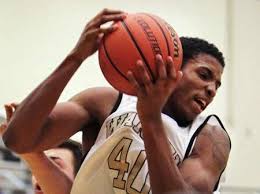 The first thing you notice about IU freshman Devin Davis is his length.

When he played at Warren Central High School in Indianapolis all of seven months ago, Devin Davis was often the biggest and strongest player on the floor.  That made him an Indiana All-Star, but now he’s neither the biggest or strongest in the Big Ten.  He’s not even close.

But he is a very athletic and long forward for Indiana, a team in need of a lot of athleticism and length.  Davis has just wrapped up his first week of practice as a college basketball player, and he knows what he needs to do to get on the floor for the young but deep Hoosiers, and what he’s best at.

Davis is a gifted rebounder who knows how to use his body to create the space needed to rebound, and he has the wingspan that coaches crave to limit passing lanes.

The construct of the Indiana starting lineup is an absolute unknown today, and how many minutes Davis can earn by quickly developing and exploiting his gifts could range from eight to 32.  He knows that, and says he knows that controlling what he can – his work ethic – is all he can do.