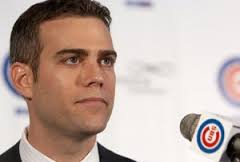 Cubs President of Baseball Operations Theo Epstein would like Cubs fans to believe that rebuilding is the road to winning, and that it takes five years.  That the length of his contract is five years is purely coincidental.

The St. Louis Cardinals just keep piling up trips to the postseason at a relentless pace despite flipping the roster even more aggressively than the Cubs.

The sad truth is that Epstein – the architect of two seasons that combine as the worst in Cubs history – is going to have to catch a team that does best the thing at which he proclaims to be the master.

The Cubs claim to be in the throes of a self-imposed exile from winning because former GM Jim Hendry ran the SS Cubbie Bear into the rocks like the late Ted Kennedy trying to cut a path through Cape Cod.  The truth is that the Cubs have chosen the path of losing, and are selling fans the bill of goods called “patience.”

The Cardinals won the World Series in 2011, and immediately said goodbye to the third best hitter in franchise history behind Stan Musial and Rogers Hornsby.  For most franchises, including the Cubs, first baseman Albert Pujols would have been the best of all-time.  Pujols wanted a 10-year deal, and the Cards said adios.

Staff ace Chris Carpenter suffered from nerve damage that effectively pressed pause on his career.  The rest of the rotation has completely turned over, as has the bullpen minus Fernando Salas (whom many Cardinals fans would like to abandon ship).

As for the rest of the roster, Ryan Theriot, Colby Rasmus, Skip Schumaker, Rafael Furcal, and Lance Berkman are gone.  That’s 82 home runs, 365 runs, and 334 RBIs.  That’s 48% of the Cardinals offense gone, the entire rotation, and almost the whole bullpen gone from a team that won a World Championship less than two years ago, and they are one game away from a third straight trip to the NLCS.

The Cubs claim that the farm system was virtually bare, and the difference between their last place team and a team like the Cardinals that wins relentlessly is the strength of the farm system, but while the Cubs are drafting kids a few years away from the big leagues and using their allocation of dollars to sign international players on talented 16-year olds, the Cardinals are drafting players like 2012 first round draft pick Michael Wacha.

Wacha threw 7 1/3 innings of no-hit ball today in Pittsburgh to keep the Cardinals alive in their NLDS with the Pirates.

If Cubs fans are looking for hope, the majority of the organizational stars who came up and played the Cards into the playoffs again were drafted in 2008 and 2009.  Theoretically, that would put the Cubs three years behind, which jibes with the Epstein timetable.  That assumes that the Cubs have drafted in 2012 and 2013 as well as Cards GM John Mozeliak did five years ago.

There is one incredible difference between the Cubs and Cards that cannot be overcome or overstated and that is Yadier Molina, who is the best catcher in the game and perhaps the most valuable player in baseball.  It can’t be a coincidence that every pitcher who the Cardinals bring up from Memphis or Springfield studs it up in St. Louis, and the common thread is Molina.

Maybe the Cubs hire Joe Girardi.  Maybe they let Javier Baez and Kris Bryant break camp with the team.  Maybe the Cubs will sign a free agent pitcher.  And maybe Starlin Castro and Anthony Rizzo will justify the extraordinary outlay of cash the Cubs extended to them.  The last three years have been filled with maybes that led to yecchs that led to 288 losses.

Epstein keeps saying that national pundits agree that the Cubs are coming.  Mozeliak has no need for Buster Olney or Karl Ravech to extol the virtues of his work.  The proof is in the pudding year after year.

One thought on “St. Louis Cardinals Show Chicago Cubs How to Retool, Not Rebuild”