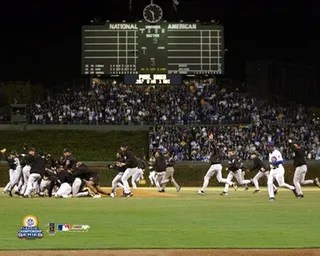 The only noise on the field after the final out of the Cubs 2003 season was made by the 25 men in Florida Marlins uniforms.

No, it wasn’t the Bartman Game, the worst night in Chicago Cubs history was the night following Bartman’s infamous blunder, the night of the Game Seven loss to the Marlins; the night that hope died at Wrigley Field – finally and forever.

Dealing with a well-meaning nebbish who stuck his hand in the way of the second out of an inning that could have ended painlessly the night before isn’t tough.  Steve Bartman was the wrong guy in the wrong place at the wrong time, like so many more before him – Leon Durham, Don Young, Charlie Grimm, Charlie Root (for both being the pitcher who started the 10-run seventh inning of Game Four of the 1929 World Series and for throwing Babe Ruth’s called shot in the top of the first inning of Game Three of the 1932 Fall Classic), and so many others who relentlessly shattered dreams of their own and millions who follow the Cubs.

The next day was worse than Bartman’s five outs to go miscue.  It started well enough though.

Just after 2p on the day of Game Seven, my office phone rang.  “Hi, this is Kent,” I said assuming it was a marketing person who would pitch me a lame guest ready to blather about the efficiency of high speed rail, the prescience of buying precious metal, or the doom and gloom of the coming global warming.  I was the assistant program director of WIBC Radio, and a good portion of my day was spent telling people politely that their stories were of no interest to radio listeners In Indiana.

“If you don’t get your ass in the car right now, you don’t have a single hair on your balls,” said Paulie Balst on the other end of the phone.  “I have a ticket for you and a ticket for Dan Dakich for tonight’s Cubs – Marlins game.”

I said, “See you in three hours!” and walked straight out of the Emmis Building on Monument Circle to my car.  I called my boss and my wife from the road northbound on I-65.

Being in Indianapolis, the drive to Wrigley Field was doable in three hours without traffic, and as it was only 1p in Chicago, I would have no trouble getting to the corner of Clark and Addison in plenty of time for some dinner with Paulie and Dan, who was already in Chicago for a coaches clinic.  The entire drive I thought about what I would see that night – either something magical or something horrendous.  Either way, being at Wrigley Field in person to witness it was a moral imperative.

Dan and Paulie beat me to the Billy Goat on Clark Street, and as I walked in, a member of the Sianis Family – the family that had owned the Billy Goat forever was parading around a live Billy Goat.  Cubs fans know all about the curse of the Billy Goat.  Old Man Sianis used to take his goat to games, and tried to get him into one of the games of the 1945 World Series between the Cubs and Detroit Tigers.  He had a ticket for the seat that the goat would occupy, but was told to leave because the goat’s odor bothered fans.  As Sianis walked away, he put a whammy on the Cubs, and they have not been to the World Series since.

This was a night that could change that, and this member of the Sianis clan had removed the whammy with some kind of crazy incantation.  My thoughts ran to what I might be able to do myself to reverse the curse, and while holding a fork, it came to me.

I would plunge the prongs into the brain stem of the beast.  It would be over for the goat in a flash, and the Cubs would be free of both the curse and the maudlin theatrics of the curse’s removal during what was more a commercial for the Billy Goat Restaurants on the local news than a bonafide de-whammying.

Never getting the fork over my shoulder, I thought about the consequence of a Cubs loss.  If the goat is dead, and the Cubs gak up another loss to the Marlins, the only thing I would accomplish would be getting Bartman off the hook.  Trying to catch a foul ball is excusably exuberant.  Murdering a bearded mammal in the name of potential Cubs success would not so easily be forgiven – by Cubs fans or the ASPCA.  I would be vilified.

No, I would have to trust the Cubs without causing mayhem in the Greek restaurant.  In hindsight, I’m relatively sure it was the right call.

We walked into the main gate at Wrigley Field behind home plate, and there was what I believed to be an exciting buzz throughout the ballpark.  As we walked to our seats, about 30 rows up in the lower concourse not far toward third base from the line the first base line would create if it continued past home plate into the grandstand.

But the buzz wasn’t happy.  It was sheer terror.  The fans were all discussing how the deal would go down tonight.  It was a foregone conclusion that the Cubs would lose, but the guess work being done by fans was imaginative and miserable.  They had either been down this road before, or heard about the hopelessness of victory being snatched from fans so many times that the Cubs losing seemed like one of Sir Isaac Newton’s rules of physics rather than the random result of a leather ball striking a wooden stick toward eight men with cow hide gloves.

The awful feelings of the 39,574 in attendance that night were validated as speedy outfielder and Marlins leadoff man Juan Pierre tripled on an 0-2 pitch by Cubs ace Kerry Wood.  Next up was another speedster, Luis Castillo, who flew to shallow left field for the first out.  Then, the whole night unraveled.

I’ve told this story 100 times, but it shows the brilliance of Dan Dakich and bears repeating another 100 times.  With Pierre on third and one out, Dan looked at Balst and me, “Boys, I don’t know the arts and I don’t know music.  I know sports, and Kerry Wood should drill Pudge Rodriguez with the first pitch.”

Even though Rodriquez had been hotter than hell through the series, I thought this was a bold strategy that demanded further investigation.  “Why in the hell would the Cubs do that?” I probed.

“Because Pudge is gonna get on anyway, and seeing him take a 98 mile and hour fastball to the ribs will get Miguel Cabrera’s attention.  He’s 20.  This is Game Seven.  And he’ll crap himself,” Dan explained.

I looked at Dan like he was crazy (for the last time), and watched Wood and Pudge battle through a nine pitch plate appearance that ended in a walk.  Dan looked at me, but said nothing.

Cabrera launched a 1-2 pitch into the night for a three-run homer, and Dan repeated, “Boys, I don’t know the arts and I don’t know music.  I know sports.”  Yes, he did.  Yes, he does.

I thought about that damn goat being led around the restaurant, and how casting it into the nether regions of goat heaven would have been a terrible move, but could it have changed the mojo?  Did I think I was some Haitian priest?

A two-run home run by Wood in the second and another by Moises Alou in the third gave the Cubs a 5-3 lead, but even from the stands it was obvious that Wood was not the same pitcher he had been in the regular season.  He was exhausted, and looked it.

Every Marlins out felt like a stay of execution, but everyone knew the game was over.  The Cubs were 25 dead men walking.

The Marlins re-took the lead in the fifth, and never looked back.  They won 9-6, advanced to the World Series to play the Yankees, and won that series in six games.

After Paul Bako made the last out, on the way out of Wrigley Field that night, the scene was surreal.  No one said a word.  I mean no one.  The only sound was the shuffling of feet.  If you were directing a movie and demanded 39,574 people you employed stay absolutely silent as they walked out of a stadium, it would not have been this quiet.  As we exited, there were dozens of Chicago cops on horseback to control a crowd that was doing a great job of policing itself.  There would be no riots on this night.

The Cubs have yet to win another playoff game, currently sporting a nine-game losing streak.  When a baseball man like Theo Epstein rides his mythical white steed to the feet of the Ernie Banks statue outside Wrigley Field, and declares the Cubs are going to build a team the right way – from the bottom up – his intentions are pure, but he knows not the misery the Cubs bring to all who adore them.

Losing has infested the DNA of the Cubs franchise, and no amount of logic can undo it.  It’s a nefarious curse that has nothing to do with a goat, black cat, or walkman clad fan from the northern suburbs.  It’s about everyone in Wrigley Field understanding who they are and what happens there.  It’s about the blue cloak of anguish and heartache that can never be shed regardless of the names of the players, coaches, managers, or members of the front office staff..