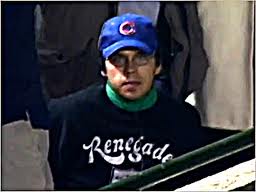 It’s time for Cubs fans to apologize to Steve Bartman, and for us to hear his story.

When a player makes a game changing mistake, he faces the nedia after talking with his agent and the media relations staff of his team.  They counsel him on the best course of action to minimize exposure and in what ways the story might quickly fade from memory.

When Steve Bartman tried to catch a foul ball that likely would have fallen into Cubs left fielder Moises Alou’s mitt for the second out of the top of the eighth inning with the Cubs holding a 3-0 lead in a game that could have sent them to their first World Series in 58 years, he had no advisors, friends, or public relations experts to guide his actions and words.

Fans threw drinks on him, and security escorted him into an office until Wrigley Field emptied and then gave him a ride to the apartment of a Cubs employee while the wait for calm continued.

Bartman was utterly alone, crushed by the thought that his action may have altered the history of a franchise that he loved.  Fans reach for foul balls dozens of times every game.  It happens occasionally to those in the front row, and now and again the game is affected by their desire to grab a souvenir.

Over 39,000 people showed up for that game 10 years ago, and all hoped they would witness would had been previously thought impossible – that the Cubs would win a fourth game in the National League Championship Series and qualify for the Fall Classic.

Just over 68 years ago, manager Charlie Grimm made the decision to start Hank Borowy on two days rest in Game Seven of the 1945 World Series.  The Tigers scored five runs in the top of the first, and that was that.  The 1908 would remain the last taste of championship baseball for the Cubs.  2003 appeared to be the year that allowed the Cubs as a punch line to fade.

The various curses and silly folklore might have been consigned to the dustbin of history had Bartman been astute enough to clear the airspace between the Luis Castillo pop foul and Alou’s mitt, but what has happened to Bartman during the intervening decade since his historic moment as the focus of the wrath of Cubs fans is even more pathetic.

Bartman’s life has been changed forever, and he has made no attempt to mitigate the negativity, and maybe that’s for the best.  There are nuts out there who might be compelled to do the guy physical or emotional harm.  Bartman is now the living and breathing embodiment of every negative moment that defines America’s lovable losers.

All Bartman did was reach into the crisp night air to catch a foul ball.  That’s what baseball fans do.

I’m sure most of the emotional upheaval that has been a part of the last 10 years for Bartman is a part of his past.  He’s smart enough to know that he’s not responsible for the Cubs losing that night.  Might the result have been different had he moved away from the ball?  Maybe, but eight stinking runs didn’t score in that inning because a foul ball wasn’t an out.

There was a period when I blamed Bartman a bit for 2003.  I laughed at the halloween costumes that mocked him, and pointed to Boston fans during the 2003 ALCS who stepped back from a ball that Trot Nixon was allowed catch over the railing of Pesky’s porch as evidence that some people get it and some don’t.  Time has moderated those feelings, and what I want more than anything now is for an opportunity to understand and apologize to Steve Bartman.

Cubs fans should embrace this man who has stayed silent for a full decade, hoping that the attention would dim.  Bartman needs to know that it won’t fade – it will never fade – until there is closure to his narrative.  Until we hear from him, and get a chance to say a loud collective “I’m sorry!” there will be no rest in our relentless need to hear from him.

The Cubs should take the lead by honoring Bartman at a ceremony prior to a game.  Bartman should take the next step by allowing a respected reporter to interview him about that night, the subsequent weirdness, and current state of his life.  I would recommend Rick Telender, who seems to be one of the few adults working in Chicago media these days.

There is no need to capitalize on his infamy, but allowing closure for himself and the fans who are genuinely sorry that one night a decade ago, a young fan walked into Wrigley Field to witness magic, and left a pariah.