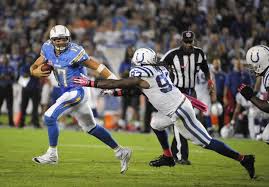 Colts linebacker was just a little too slow to catch Phillip Rivers last night, just as the Colts were not good enough to beat a mediocre team on the road.

The week after the Colts beat the Seattle Seahawks, the media went on a hysteric crusade to anoint them as a potential Super Bowl team.  That was as absurd last week as those who watched last night’s mess and feel today that the Colts aren’t a playoff team.

Like all teams in the NFL, the Colts are dealing with injuries.  Running backs Vick Ballard and Ahmad Bradshaw are out for the season, as is tight end Dwayne Allen.  Safety LaRon Landry has played in two games, the last against the Dolphins one month ago.  All are playmakers, and would have had a profound effect on the level of play for the Colts.

Last night, was misery to watch, and I’m certain that coaching it was worse.  Whatever the decision, nothing worked after the game opening flea flicker.  Return specialist David Reid takes a knee, the ball comes out to the 20; he brings it out and the Colts are lucky if he advances it to the 20.

Go for it on fourth down in the fourth quarter, and they likely lose.  Punt and they likely lose.  Run the ball, get stopped.  Throw, the pass is dropped.  Send four at Phillip Rivers, and he waits for a receiver to break clear of Greg Toler’s coverage.  Blitz, and Rivers quickly finds Danny Woodhead singled on a linebacker.

There was no beating the Chargers because the talent on the field was not good enough to win the game.  The construction of the Colts on both sides of the ball has shown a clever ability to plug in players that fit the Colts system, but lacks the overall talent to compete and win every game.

Then, there is quarterback Andrew Luck.  He is the best young quarterback in the game, and at his disposal is Reggie Wayne who will be the second most prolific wide receiver in NFL history when his incredible gifts recede and he finally retires.  Beyond that, the Colts are good enough to beat most teams they should, but not great enough to beat all.

Great, lucky, or a combination of the two wins Super Bowls, and to win a Super Bowl, the Colts are going to have to be lucky.  The Browns didn’t trade running back Trent Richardson for a 2014 first round pick likely to be in the 20s because Michael Lombardi believes T Rich is the next Jim Brown.  Linebacker Jerrell Freeman didn’t go undrafted and ignored for three years by the NFL because he’s Mike Singletary Jr.  These are two of 50 role players, all of whom must be consistent B players if the Colts are going to win.

That’s not to disparage either Freeman or Richardson.  Every team needs players would are capable and competent.  The Colts have a lot of those guys right now – too many of them to be considered a Super Bowl contender.  They are not a great team.  They are a good team with a soon-to-be great quarterback.

Most picked the Colts to go 10-6 prior to the season starting, and that means that there are going to be six weeks that follow a loss that are going to be miserable, and ten weeks that will be filled with joy.  They will earn a spot in the playoffs, and they will be eliminated unless ordained by a higher power (as was the case with the Ravens last year) to be worthy of finding a way to MetLife Stadium.

As a fan of the Colts, I was furious at the four or five dropped passes and ambivalent work by some members of the defense.  The Colts were outworked and outplayed last night because that happens to a good team on the road.  They don’t make the plays necessary to win.  That they stayed close enough the battle was a testimony to Luck’s leadership because the result was not in doubt for a single minute of the second half.

The 6-0 Broncos are next, and while a win last night would have allowed the hype for Peyton Manning’s homecoming to mushroom, it’s still going to be fascinating to see how the Colts and their fans respond to the Babe Ruth of this franchise coming back to the building his excellence built.

The Broncos will be asked to answer the same challenge that overwhelmed the Colts last night.  Can a good team with a great quarterback find a way to win in a hostile environment?

One thought on “Indianapolis Colts – Minus Andrew Luck, Current Roster Is Picture of Mediocrity”