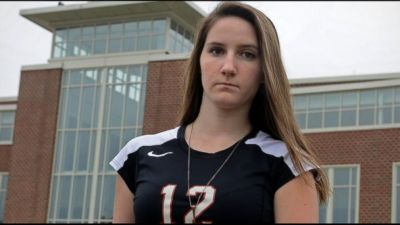 Erin Cox is an honor student and athlete whose leadership role has been stripped because she acted like a leader.

Zero tolerance is an idiotic dodge, and for every time it’s applied rationally, there are a dozen examples of poor implementation.  Black and white rules work for school administrators because the rules remove responsibility for their use, and administrators, like all managers, hate the thought of being blamed for anything.

People are fired, not rules, so adherence to the rules is a must-use premise for continued payroll check delivery.

So here’s the short story of what happened to Erin Cox, a volleyball player at North Andover (Mass.)  High School.  She’s home relaxing when she gets a text.  A teammate is too drunk to drive home from a party, and needs a ride.  Cox, a senior captain, heads to the party to provide a safe way home.  Cox walks through the party, finds her friend, but before they leave, the cops show up to end the madness.  They arrest some for illegal possession of alcohol.  They issue summons to others for illegal consumption.  Cox was one of those summoned, despite a police officer vouching for Cox’s story and sobriety.

The school suspended Cox for five matches and stripped her captaincy.  This wasn’t even guilty until proven innocent.  This was penalty before any due process whatsoever.

Makes plenty of sense.  Is it any wonder why teenagers look at adults and wonder at what point the dumbass gene kicks in?  A girl tries to help a friend and teammate avoid potential tragedy, and is told she is no longer a worthy leader.

Parents get upset about incidents of stupidity robbing opportunity from their kids, so Cox’s parents sued the school to reverse the punishment.  I’m no fan of silly lawsuits, but parents need to back their kids, and if not through the courts, then how?  My Dad threatened an assistant principal with a beating.  Today, Homeland Security would have been called to repel my Dad’s empty threat.  The courts are a better, if less direct path to justice.

The attorney for the school told the media of the school’s desire “to take a very serious and principled stand regarding alcohol.”  How about a serious and principled stand regarding leadership, and the need to mold the character of it’s students?  How about rewarding someone who sacrifices to keep a friend and teammate from making a potentially tragic mistake?

This all assumes that the media reports and mother’s statements about her daughter’s behavior are accurate, but from what we know about school districts, churches, and businesses, job #1 is lawsuit aversion.  Being sued gets people fired, and zero tolerance erases the possibility for a judgment call that might cause a lawsuit over an issue a hell of a lot more serious than a five-game rip and stripped of captain’s stripes.

It’s a shame that high schools have positioned themselves as the teachers of a lesson that should be saved for a time when students have already become part of this societal problem – that fair and unfair is determined by what can and can’t be litigated.  For the most part, adults are fear-based morons whose desire to pay their mortgage and keep their kids in private school outweighs doing the right thing for those who deserve it.

Most kids believe that life is a meritocracy when that couldn’t be less true.  Life is about satisfying greed, and if an 18 year-old who tried to do the right thing gets in the way of a self-centered adult, that doesn’t even warrant a discussion.  Decisions mean responsibility, and responsibility puts at risk position, power, and income.  Forty-year-old school administrators and middle managers in $500,000 homes will fire, suspend, or otherwise make miserable those in their charge to perpetuate their lifestyle, regardless of what they deserve.

Over the two weeks since the party, Cox and her classmates have learned a lesson that will strip them of all hope for an adulthood filled with capitulation to doing the convenient thing for reasons governed by chiselers and thieves whose business is done in plain sight under the protection of rules and principles crafted to perpetuate wealth.