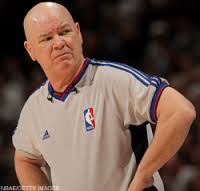 How does Joey Crawford call a game? (Insert joke here) A bit of understanding I gleaned this week is below.

The NBA is hard to watch for people who like consistent officiating.  My issue has always been that the same act can be a foul at one moment, but not in the next.

I sat and listened to an outstanding explanation of officiating this week, and would like to share the wisdom I received.

The first bit explained the source of my frustration, and provided me with enough wisdom to move beyond it.

Calls are not made because of the act, but because of the result.  It isn’t a foul or violation if the result of the foul does not provide an advantage.  Whether or not you agree with that philosophy or not isn’t important – it’s what causes the whistle to blow, and if you want it different, the NBA is going to drive you batty.

Here’s another clarification that will bring understanding – a hand of the defender on the offensive attacker is not a violation.  If the hand impedes the progress of the attacker, that is a violation.

There is gray area everywhere, and intent is weighed by the referees in every situation.  That makes officiating as much about psychology as physics, so people who want all motorists traveling faster than 55 mph on I-465 to get a ticket will go crazy watching an NBA game.

Here are some other pieces of information that will help clear the fog of misunderstanding about NBA officiating:

Here are two new rules and one new request:

Here’s one area where despite the explanation, I have no idea what the rule is – use of replay to confirm, overturn, and make calls.  I am against replay in all its forms, so I tuned out as a childish response to the answers to those questions.