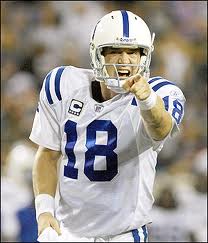 Peyton Manning doesn’t wear this jersey anymore, and a tribute honoring his work here should wait until he doesn’t wear any jersey.

The horse last left the barn, and there is no way to unring this bell, but the Indianapolis Colts should never have given serious thought to providing Denver Broncos quarterback Peyton Manning with a video tribute, or any other measure of honor prior to Sunday night’s game at Lucas Oil Stadium.

After all, he is the opposing quarterback.

Following in the footsteps of a legend like Manning is tough enough, but forcing Luck to watch a video tribute and listen to the ovation of a crowd who pays to watch the current Colts – a team for which he hopes to play as long as Manning did – is cruel.  Luck is a grown man, and he’ll be just fine, but it’s an unnecessary slap in the face to a guy who so far has done everything the right way to moderate the separation anxiety of a fanbase that still foolishly debates whether Luck or Manning would make the Colts better.

The Colts defense is supposed to attack with ferocity the Manning led offense – one of the most prolific in NFL history through six games – after watching a video that is reportedly poignant enough to make people cry?  Maybe the defense can look at the video, and turn their response toward rage.  Chicago Bears legendary linebacker Dick Butkus used to watch game film and contrive reasons to hate his counterparts.  The defense might be seething by the time the thing ends and the crowd stops chanting “Pey-ton Man-ning! Pey-ton Man-ning!”

How is Manning supposed to compartmentalize his emotions about his homecoming – difficult enough already – after being honored.  Manning isn’t some old man beyond his prime taking a validictory lap, like Edgerrin James was with the Seahawks when he returned to Indy.  This is the 2013 season’s MVP after six weeks, hoping to taking the release handed to him by the Colts and ram it straight up Jim Irsay’s ass.  To make Manning sit still for this tribute is cruel and self-indulgent.

And how about the fans?  This is like attending the funeral for a loved one who springs from the grave to knee you in the nuts.  Fans have loyalty toward Luck that will make them feel a little dirty for cheering Manning.  They want the Colts to win, but hate to see Manning fail.  The video will force them into an unnecessary discomfort.

The video and series of tributes could have waited 10 years, and been wonderful.  Marvin Harrison, Dallas Clark, Edge, Jeff Saturday, Dwight Freeney, Robert Mathis, and Gary Brackett could have saluted him during his induction into the Ring of Honor. Maybe the starting 11 from the Super Bowl Championship team can stand in formation in their jerseys, and Manning could throw one more touchdown pass to Harrison.  That would be great in 2023.

There is plenty of time for the Colts to honor Manning, indisputably the most important sports figure in the history of the city or state.  Lucas Oil Stadium wouldn’t exist without the ignition of football fans in Indiana during Manning’s incredible run of excellence.  The Colts would likely have moved to Los Angeles.  No Super Bowl Championship, no host the Super Bowl, no convention center expansion, no NCAA Final Four, and none of the downtown growth that those events have spawned.  Over the past 15 years, the talent pool of college football recruits Indianapolis has exploded.  Why have kids who would have played basketball chosen to play football instead?  Manning isn’t the only reason, but he was the lever that tipped the scale.

Manning hasn’t been the only person who put Indiana on the national sports radar, but he has been the most visible.  This weekend, he will bring the national media spotlight back to town, and make Indianapolis look like a great place to live one more time.

The Colts, City of Indianapolis, State of Indiana, and everyone who lives within 100 miles of Lucas Oil Stadium owes a financial and emotional debt to Manning.  The time to begin paying it off with cheers and tears is several years down the road.