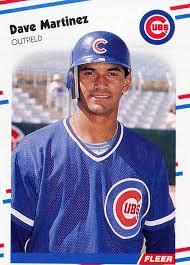 Baseball-reference.com rates Jim Piersall as the most similar player to Dave Martinez. He would need to be equally crazy to take the Cubs Manager gig.

Someone is going to accept the position as manager of the Chicago Cubs because team president Theo Epstein is going to offer enough money to make it difficult to refuse, but that person should know walking through the door that a promising career as a big league manager will end two years from now when the Cubs feel they are ready to compete.  It should not be former Cubs outfielder Dave Martinez.

Rich Renteria, Manny Acta, Dave Martinez, and A.J. Hinch have emerged as the four finalists, and barring an 11th hour entrant, one of those four will accept an addition to his resume’ that will forever poison his candidacy for all other similar positions.

There is no chance at all for the Cubs to win anytime soon – even by their own admission.  They continue to look at 2016 as a year when contention is possible, but even that is a longshot given the youth and farm system of the St. Louis Cardinals.

The first question candidates need to ask both themselves and management as they are interviewed is what Sveum could possibly have done to save his job.  With an outfield with Ryan Sweeney, Nate Schierholtz, and Junior Lake, and a rotation of Travis Wood, Jeff Samardzija, Edwin Jackson, Jake Arrieta, and someone else, winning is inconceivable in 2014, and next year’s roster is expected to be less talented than the opening day 2013 group.

The Cubs are coming off the worst three-year run in franchise history, and the Cubs are a team that has known its share of miserable stretches.

The backslide of supposed future stars Starlin Castro and Anthony Rizzo was a  supposedly a major factor in the decision to replace Sveum, but it’s unclear whether Epstein and general manager Jed Hoyer accepted responsibility for the malaise that engulfed the clubhouse after they dealt virtually every valuable piece on the team.

With each deal for farm system filler, the Cubs removed a sliver of enthusiasm from the remaining players.  There was no expectation of winning, and so the young players learned to accept losing.  Is there a better recipe for a mediocre effort?

Season ticket holders have had enough, so the front office has fortified its ticket sales staff with the same philosophy it’s building depth in the farm system – more bodies equals a better result.  That the phone sales staff is trying to compel whomever answers the phone to write a substantial check (third highest average ticket price in baseball in 2013) to watch a team that admits its immediate future is dismal seals its fate as surely as the team itself.

The hire of a manager will be positioned to inspire hope – the kind of hope that will be communicated during those uniformly unpleasant phone calls – and in two years when that hope will be seen as a foolish emotional investment, he will be dispatched to the same scrap heap that holds the wreckage of so many others.

A successful career path as a manager/coach is as much about timing as talent, and the timing for accepting this job could not be worse.  For Martinez is particular, who is the bench coach for Tampa Bay Rays leader Joe Maddon, the Cubs job is a third rail not to be touched.

As for the response of the season ticket waiting list yo-yos who are being hounded as current season ticket holders forfeit their right to overspend to watch a triple A team, it should mirror what Martinez should tell the Cubs brass during his interview today – “No thanks.”