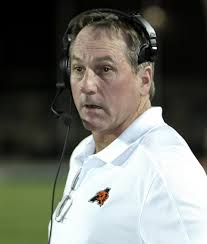 Tim Buchanan was accused of bullying by a parent who just doesn’t get it.

Most parents of high school athletes are morons who can’t help but intertwine their feelings of worth with the successes and failures of their children.  They are the absolute worst part of youth sports – for the kids, coaches, and other fans.

And it’s getting worse.

Back in the day, it wasn’t easy to get parents to show up for games.  Now, you can’t keep them away, as much as the coaches and kids might like to.

One such parent was so outraged at the butt kicking her son’s Fort Worth Western Hills team took at the hands of top-ranked Aledo High School that she went online and filed a bullying form as a result of the 91-0 loss.  School administrators were forced to waste time by investigating the charge – as is mandated by state law.

The findings were that the coaches played second and third teasers throughout the second half, and the opposing coach applauded the class with which the Aledo kids comported themselves.  Case dismissed.

Absorbing that kind of beatdown is miserable for the team on the losing end of a 91-point loss, but there is no lasting mark left.  Despite parental loyalty, not everyone should get a participation medal each time children don uniforms.

One team wins, another team loses, and then you get something good to eat.  As long as the kid worked hard in preparation, he has nothing to be ashamed of.

The obsession moms and dads have with mitigating every single little bit of adversity suffered by their kids is misplaced.  The best parenting teaches children that adversity is fleeting, and that character is determined by the reaction to adversity.

Winning and losing high school sporting events should be important to the players, not the parents.

Supporting kids should not include completing a form on an opposing school’s website to file a formal complaint in an area that should be reserved for kids who feel the dread of being bullied on a regular basis, but even that gives me reason for worry.

The very best advice I ever got from my Dad was to punch a kid in the face the next time he picked on me.  I was a seventh grader, and walked out of the school rather than deal directly with a kid who enjoyed whacking me on the head with a pencil repeatedly.  Dad drove me back to school, sought out the principal, and said, “I told Kent the next time this kid touches him, his response should be to punch him in the face as hard as he can.  I understand you might have a problem with that, but I will have a problem with it if he doesn’t, and I’m his father.”

Next time, I cracked the kid in the mouth.  Problem solved.  No further problems.

Obviously, those who bully the weak or challenged need to be dealt with in an entirely different way, but solving that problem on my own without a parent filling out a form to complain served me very well.  It gave me confidence, and resulted in my being a dad who consistently empowered my son to solve his own problems.

If a kid doesn’t want to get hammered 91-0, get in the weight room.  Work out.  Find an advantage.  Solve the problem.

Now, because a parent went rogue and decided to file a form, this is a national story, and everyone in the country knows Aledo trampled Fort Worth Western Hills 91-0.  The kid whose parent decided to take matters into his or her own hands is now responsible for the national media attention they would rather avoid.

If you are a kid with an overbearing sports parent, confront him or her head on.  Don’t let them ruin the experience for you.  Tell them to back of.  If you are a parent and you catch yourself not smiling and giving your kid a hug after the game, back off and reassess.

No parent is perfect.  None who care for and loves a child can avoid taking it too seriously on occasion.  In the interest of full disclosure, I’ll share my worst three sports parenting moments:

So there you go.  We all make mistakes.  We tell our kids all the time to work hard to improve.  Some of us can use some of that advice too.  As for that parent in Fort Worth – let your son fight on the football field for his own self-respect.  You can’t earn that for him.