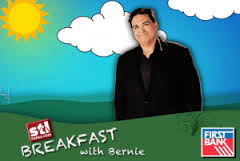 After spending a good portion of yesterday consuming national media reports looking for some unique information about the World Series, I went to the source where I should have started, St. Louis Sports Dispatch columnist Bernie Miklasz.

As I expected, Bernie gave me a whole lot of what I got nowhere else.  He talked about the way Boston tries to wear out pitchers by working deep counts.  They don’t bite on pitches out of the strike zone.  You want to get the Red Sox out, strikes are required.  These guys aren’t Alfonso Soriano waving at sliders low and away until the umpire tells them to sit down.

He spoke on his always enlightening “Breakfast with Bernie” about how the Red Sox led baseball through the regular season in pitches per plate appearance, and how they forced Justin Verlander and Max Scherzer to work so hard for outs that the bullpen was called on early, and that exposed the Tigers greatest weakness.

Now, that’s not brain surgery, but Bernie was the only guy who spoke or wrote about it.  That’s what makes Bernie a must read and a must watch.

This morning, everyone is talking about the patience of the Red Sox – how they made starting pitcher Adam Wainwright miserable by not swinging at the pitches that other teams can’t lay off.  Bernie had it yesterday.

Bernie gets it right before everyone else because he works harder than anyone else.  Preparation for Bernie doesn’t involve watching Sportscenter and reading other columnists’ work.  He forges a trail through hundreds of statistics and his many years of watching the game to arrive at a destination of unique enlightenment.

The perspective he offers is always unique, and sometimes flies against the prevailing wind.  That makes Bernie what doesn’t exist in many places – a resource that will make readers and viewers better informed and more likely to enjoy the game.

Baseball is revered in St. Louis, and Bernie is a big part of the reason.  It was a baseball town long before Bernie came for good in the late 1980s, and it will be a baseball town 100 years from now when we are all dust, but Bernie has crafted a legacy through his consistent diligence that makes St. Louis a town filled with better informed baseball fans.

Because of Bernie – in large part – when you see a game in person at Busch Stadium or sit in a sports bar in Soulard, you will hear conversations that reflect an unusual depth of knowledge about the details that make baseball fascinating.

At a game in 2011, Tony LaRussa made a defensive switch in the top of the seventh that brought in Daniel Descalso to play third in place of David Freese, whose range has been limited because of foot and ankle injuries.  The Cards were up two.  The timing of the switch meant that Freese’s spot in the order would be due in the bottom of the ninth if the opponent was able to tie or take the lead in the game.  I heard three sets of fans surrounding me talking about the timing of the switch.  I’ve been to Wrigley Field 100s of times, and have never heard a similar discussion of a granular aspect of a game.

That’s the influence of Bernie Miklasz.  He’s taught an entire city how to evaluate baseball strategy in the same way he does.

People don’t know Bernie nationally because he doesn’t travel to Bristol anytime he’s asked to be on ESPN.  His reward for great work isn’t in watching his Klout or Q score rise; it’s in going to bed every night secure in the knowledge that he busted his ass to get it different and get it right.

I worked with Bernie for two years at 101 ESPN in St. Louis.  (He left the radio business two weeks after I came back to Indianapolis – coincidence?  Yeah, it was a total coincidence.  I couldn’t have argued Bernie into staying – nor would I have tried.  He’s in a place that makes him happy, and allows him to enjoy life at a higher level.)  There are those in the sports perspective business who glide through life, using cleverness to mask a lack of work ethic, but Bernie is the polar opposite of those mopes.

Bernie loves the investigative work needed to find a rare nugget that leads to an enlightened take, and St. Louis sports fans correctly love and respect him for it.