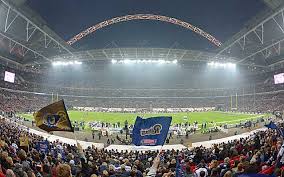 This was my perspective among the baffled Englishmen at the 2012 International Series game in London. “Hurrah! For whom are we cheering? Did you touch me bum? Hurrah again!”

Too much going on to dig in deep about any right now, so here are some mini-posts about the big stories that are trending now:

The NFL will stage three events in London next year, and in today’s announcement of which six teams will play in those games, NFL Commissioner Roger Goodell overstated the NFL’s position in the British consciousness, “Our fans in the UK continue to demonstrate their passion for more football.  The growing enthusiasm for the NFL internationally is exciting and we look forward to continuing to respond to this interest in our game.”

I was in London one year ago this week for the Rams vs. Patriots debacle (for the Rams; it was a coronation for the Pats), and the correct word to describe the interest in American football is curiosity.  The complete lack of knowledge about how the game functions makes for hilarious conversations with Londoners.

The overall vibe during my four days there was indifference, but that’s not entirely different from what I experienced in St. Louis when talking about the Rams, so who knows whether the NFL can survive full-time at Wembley Stadium.

The national media is in full hyperbole mode as the Cardinals were blitzed 8-1 last night in Boston.  They are like the nimrods who read the first chapter to a novel and feel they know exactly what is going to follow.  If this series was “Gone with the Wind,” Rhett Butler just kissed Scarlett O’Hara.  There is no way to know whether Atlanta will burn, Scarlett will prosper in business, and that their daughter will die.

We watch because we don’t know, and guessing the direction of this series after one game is ridiculous.  In the 1991 NBA Finals, the Lakers won Game One, and then lost the next four.

There is no way of knowing.  If it makes your Thursday go by more quickly, go ahead and prognosticate.  By the way, Michael Wacha is going to dominate tonight, and with Buccholz 50-50 to pitch at all in the series, the Cardinals will win in six.  I can’t help myself either.

The St. Louis Rams finally found a way to be a little bit relevant in the national media.  They reportedly told Adam Schefter of ESPN that they reached out to Brett Favre to gauge his interest in making a return at the age of 44.  Favre reportedly declined, but on a day when the big stories are a blowout win by the Red Sox, and a game preview of tonight’s drab Carolina vs. Tampa Bay tonight, Favre leads.

If the Rams goal was to inject some life into coverage of the team, mission accomplished.  If they really had a serious thought about Favre leading the team on Monday Night Football against the Seattle Seahawks, COO Kevin Demoff should call a hazardous materials crew to test the water in the building.

No one in their right mind would project Kellen Clemens as a winning starter, but to exhume Favre would have been like the Cardinals calling Bob Gibson to start Game Three if Wacha fails tonight.

The Cubs continue to search for their next sacrificial goat.  Whomever Theo Epstein hires is almost certainly doomed to be fired after the 2015 season.  Dale Sveum did a good job with shoddy tools, but was sent packing after two years.  The talent – if anything – will be even worse in 2014 for the new guy.

Why a first time manager would even consider accepting this gig is beyond me.  Only misery lies ahead.  For a two time loser like Manny Acta, I get it.  No one with a chance to win would ever put Acta in charge of their team.  He is to baseball what Rich Kotite was to the NFL.  Their is no risk for Acta as he has nothing to lose.

The Cubs will hire the best of the candidates who would accept this certain journey of woe on the North Side’s most predictable trail of tears.