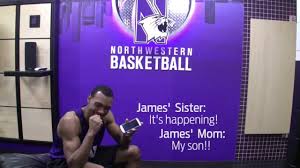 Northwestern’s James Montgomery tells his mom and sister that he earned a scholarship.

Two things we learned yesterday about shiny new Northwestern basketball coach Chris Collins – he appreciates the work of the unheralded, and he is pretty sharp at crafting an image.

Basketball walk-ons are interesting people.  At big time programs, there are guys hoping for a shot at the NBA, and others who just want to shot to play meaningful minutes for the team they belong to because they chose it – not because it chose them.

They work tirelessly to maximize their comparatively meager gifts, with their only reward being the best seat in the house, and the friendships that can only blossom among teammates.  Walk-ons aren’t playing for tuition, room and board, or books.  They play only because they love basketball and want the best for their brothers in arms.

Most were outstanding high school players who lack an attribute needed to be seen as a valuable cog on a college team.  Many could have played at a lower level, but want the opportunity to prove their value on the biggest stage.

Basketball players dream of playing in the NCAA Tournament, and giving up on that dream comes hard, so they report to campus, do all the work, set a positive example, and support teammates who are going to carry the load as they compete in games.

My son was a walk-on at Loyola of Chicago after some bad fortune kept him from accepting two offers to play in the Ivy League.  The coaches for Harvard and Princeton left their schools as Ryan was a senior at Cathedral High School.  There was a scholarship offer from Indiana State, but there was little doubt that Royce Waltman would lose his job before Ryan would report, so that was out.

He accepted an offer to be a preferred walk-on at Loyola, and worked hard there to help his teammates improve with minimal tangible reward for four years.  The adversity he faced and overcame at Loyola has helped shape the young man he has become.  Ryan is now a first-year law student at IUPUI, and I am certain that he will be successful in every way – in large part because of the experiences that challenged him in Rogers Park.

While we always selfishly hoped that Ryan’s coach would award him the scholarship he earned – after all who can’t use $32K after taxes every year – but knowing what I know now, I wouldn’t change a thing.

Being a walk-on is a thankless job only if the short-term reward is assessed.  The occasional hardships involved for the player and family are irreplaceable character builders.  Those who accept the challenge learn very quickly about the need for relentless hard work in life, and develop an ability to push others to improve.  Nothing made Ryan happier than when he pushed others to perform at their best during practice, and he became very adept at enforcing a level of effort among teammates.

I have no idea what challenges lie ahead for Ryan, but I am certain that his four years of disciplined effort at Loyola will serve him well throughout his life.  When you look down the bench at the kids you only get to see play during blowouts, don’t feel pity for them. Their rewards don’t come obviously or early, but they will come.

Walk-ons will never play in the NBA, but the maturity they develop during their long hours of work will serve them exceptionally well down the road.

A reward did come for Montgomery, but he should also understand that in 10 years, he is going to be very happy that he spent two years as a walk-on because he learned that his passion for basketball and pride in his own work ethic were enough to fuel his daily participation in an all-comsuming activity.

For all the morally corrosive crap that pervades college football and men’s college basketball, there are people who play only because they love their vocation.  You don’t have to look too far to find a reason to love college sports – they are just a little further down the bench than the guys you recognize.

Instead of reading another dissertation about the O’Bannon lawsuit or watching the video of a self-serving athletic director like Tom Jurich talk out of both sides of his mouth, take a minute to watch a kid share a dream come true with his teammates and family.  We need reasons to remember why we love college athletics.  This is a pretty good one.