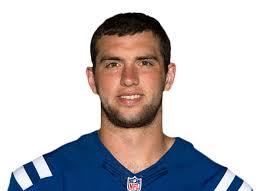 This game was over with a minute left in the third quarter with the Houston Texans leading the Indianapolis Colts 24-6.  Looking at the box score, the game is still over with the Texans winning to stay alive in the AFC South.

Gary Kubiak is looking toward recovering from whatever caused him to collapse on the field at halftime.  All the Texans have said is that it wasn’t a heart attack.  Wade Phillips took over as head coach, and not to be insensitive, but knowing that Phillips was calling the shots motivated increased hope.  Honestly, is there a coach in the NFL you would rather see on the opposing sidelines with the game on the line in the fourth quarter?

Cries from homes in Indianapolis throughout the first two-and-a-half quarters were, “What the hell is wrong with Andrew Luck?!”  During the fourth quarter, the cries turned to cheers, and an almost certain loss became yet another comeback win for the second-year genius.

Take a look at the statistics – other than points scored:

Two statistics had significant meaning in determining the score – Adam Vinatieri made 2-3 field goal attempts for the Colts, and Randy Bullock made only one of his four attempts.  The Texans were penalized five times for 86 yards, and the Colts only three times for 15 yards.

But even with the missed kicks and excessive penalties, the Colts won the game because Luck is a marvel.  Only 1 1/2 seasons into his pro career, he is already evoking comparisons to Steve Young, Brett Favre, and (gasp) Peyton Manning.  The Colts are a team with a lot of parts that bring success but no position on the field is as important as quarterback, and Luck has both the measurables and intangibles needed to achieve greatness.

Gone are the Colts best two best running backs, their hall of fame wide receiver, and top tight end, but they keep right on rolling because of the aggression of general manager Ryan Grigson in building a roster, and the superb leadership and skill of Luck.

Next up will be the embattled St. Louis Rams, who are 3-6 and without the quarterback they were hoping would blossom as Luck has – Sam Bradford.  Instead, the Colts will try to defend Kellen Clemons and an extremely young set of offensive weapons.

The brutal first half schedule softens in the second half of the season.  With wins against the 49ers, Seahawks, and Broncos, the Colts appear to be good enough to compete for a championship.

The Colts aren’t a great team.  Nowhere are they dominant, but everywhere they are competent.  With Luck under center, that has been enough six-of-eight times.  With the Rams at home, Titans (home and away), Texans at home, Jags at home, and the Cardinals, Bengals, and Chiefs on the road, 11 wins looks like a lock.

But as anyone who has watched the NFL for more than 15 minutes knows, there are no locks.  Anything can happen, but there is undoubtedly a trend emerging that the Colts and Andrew Luck are much more likely to win close games than lose them, and every team’s schedule is filled with games that come down to a single possession.

Tony Romo and Andrew Luck are tied for the NFL lead in comeback wins since the beginning of the 2011 season, when Luck was still a year away from playing as a professional.

Luck’s run of great comeback wins is growing almost as quickly as his beard.