“Big Willie Style,” that’s the nickname I now use to describe Ball State wide receiver Willie Snead.  Yes, I stole it from the title of Will Smith’s popular 1997 album, Big Willie Style, so I’m not exactly being uniquely creative. But I’ve seen enough of Snead’s catches the past few seasons to come to expect reliable, big-time plays. He’s earned the moniker.

Snead and the rest of the Cardinals (8-1, 5-0 Mid-American Conference) will look to continue their winning ways tonight in Muncie against Central Michigan (ESPN2, 8 p.m.). Most important, a win against the Chippewas would set up a big MAC West showdown next week at undefeated and BCS No. 18 Northern Illinois.

As for Willie Snead, he made his mark on the Ball State football program early and often. More than halfway through his junior year, Snead has accumulated career totals of 21 touchdowns and 2,500 yards receiving. It’s now commonplace for Snead to have 100 yards receiving and a highlight reel catch just about every game. 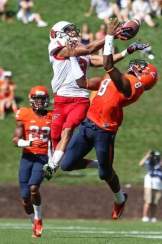 It’s not just the overall production that stands out. It’s also the types of catches – a clutch sideline gem to put Ball State in position for a last-second field goal last year to beat Indiana, an acrobatic back of the end zone snag against South Florida last year that was a Sports Center highlight, and a one-handed touchdown grab a couple of weeks ago at Akron. This flare for making clutch plays started his freshman year when his first career touchdown catch came with 29 seconds left in a game versus Buffalo to seal a Cardinals victory.

Snead is currently third in the country with 1,057 receiving yards. It doesn’t hurt when your quarterback is Keith Wenning, who has been ranked in the top five nationally in passing yards all year. The two have been quite the combination the past few years. It’s not uncommon for Wenning to go to Snead over and over. He knows he’ll either be open with precise route running or be in position to make one of Snead’s signature catches – covered or not.

Snead, from Belle Glade, Fla., took an interesting route to get to where he is. Growing up in Florida, he played at Glade Central High School his freshman year before following his father’s coaching career north and moving to Michigan his tenth grade year. More interesting than that, though, is the fact that one of the nation’s leading college receivers was a bona fide quarterback in high school. His senior year, Snead was named Michigan Player of the Year and racked up 2,500 yards passing and 1,320 yards rushing. 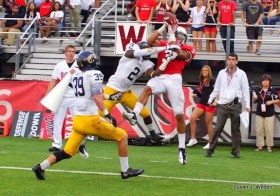 So how did “Big Willie Style” become a receiver? In addition to growing up early on in the football crazy south, he also grew up in a family of wide receivers. His father, Willie Snead III, was a receiver for the Florida Gators in the mid-‘80s.

“My dad and uncle played wide receiver,” Snead said. “My family is full of wide receivers. I just felt like I could do it, I could change it up. If anything, playing quarterback helped me; just reading defenses and things like that. I just kept working and hoping for the best that some team would pick up on me, and Ball State came calling and I ended up here.”

While it’s easy for fans and media to look ahead, Snead knows there’s no room for his team to do so against Central Michigan. “We just make sure we come out every day to practice working and making sure there’s no talk about Northern Illinois,” Snead said. “We’re just focused on Central (Michigan), because our whole season could change if we were to lose this game.”

Maybe it’s my penchant for acting like I’m cool and thinking I’m cool around my kids sometimes – busting out obscure 90s rap lyrics – that made me think of the nickname for Snead. But when I said “Big Willie Style” after Snead’s one-hander against Akron, my son’s response was a smile. That’s all the validation I needed to know that I hit on something big.