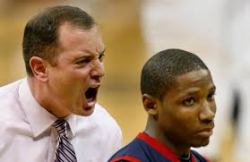 Mike Rice doesn’t understand what he did wrong, or why it was wrong.

That much is clear in reading a profile of the new and rehabilitated Mike Rice.  You remember Rice.  Seven months ago, a video surfaced that showed him hurling basketballs at his Rutgers University players.  He also used extreme profanity, and called players offensive names like “faggot.”

Rice was fired very quickly, as was his athletic director Tim Pernetti.

“Everything I’ve ever done is fight, scratch and claw, and now I have to sit back and take it, listen to people say I was abusing my players? I was an idiot, but I never abused anybody,” Rice told Jonathan Mahler in a New York Times Magazine profile.

The sad truth that Rice still fails to understand that he doesn’t have the luxury to determine whether he abused anyone.  The players themselves hold that power, and the threshold for abuse resides at different levels for each of them.

Some have thick skin, and others don’t.

There are people that have an ability to hear the words without being hurt by the tone.  Some hear only the emotion – the disappointment – when they are the subject of derision from an authority figure.

Whether the old school methodology of getting in the grill of a 19-year-old basketball player is effective in building an successful and competitive athlete can be debated, but the legal exposure to which a school may be subjected because of the hurt feelings of a subordinate cannot.

And make no mistake about it, Rice was fired not because he threw a basketball at some kids or called them nasty names; he was fired because Rutgers feared a lawsuit and the negative press that was being heaped upon them because of the video.  The school knew that Rice was tightly wound and crossed lines in practice.  It wasn’t until a wrongful dismissal suit by an assistant coach and the release of the video he assembled that Rutgers showed its teeth.

But Rice still sees himself as a coach whose demanding nature helps build better basketball players, and in doing so he validates himself in the eyes of his father, a former basketball coach and still the color analyst for Portland Trailblazers basketball.

At some level, most men are driven to please their dads, and the admiration and affirmation expressed to Rice by his dad up until his firing validated that behavior throughout his career.  Rice’s recent effort to rehab his image is all about getting people to forget about what he views as the lone incident that has caused this mess.  It’s not about correcting the behavior that caused the negative event, and that’s where the work needs to be done.

Tough guys tend to be tough guy coaches, and their strategy in dealing with players is to treat them as they were successfully dealt with.  Unfortunately, all people aren’t that tough.  Some take instruction that sounds as though it comes from a place of anger as an attack, and when they don’t respond, coaches take it up a notch.  Rice finally took it up enough notches that the meter broke.

For better or worse, coaches aren’t evaluated solely by the results they achieve but by the public and legal evaluation of the methodology they use to gain those results.  Videos showing a lunatic – whether for effect or not – will always get a coach fired.

Violent temper tantrums are self-indulgent, and show an immaturity that has no place in coaching.  They are indicative of a person who cares more about the results of the team than the impact those actions might have upon the players is or she is charged with leading.

The drive that led Rice to success in a hyper-competitive business also caused his career to unravel.

He needs to understand that basketball is not about the success or failure of the coach, but the development of the players on the floor.

“It’s easy to say now, but when I was in it every day, I wanted to grab someone and just go, ‘We can do this, we’re going to show everybody,’ ” Rice told Mahler. “Because that’s who I am, and that’s what I do.”

With each word, he sounds like exactly the same guy that he was in the video.