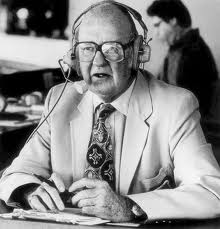 The Cubs are changing channels, not firing Jack Brickhouse, who broadcast their games from 1948-1981, so this change is not a source of angst for me.

Nothing lasts forever, so the Chicago Cubs likely being carried on another television station in Chicago is part of the evolution of life, business, and media.

The Cubs exercised an exit clause to opt out of their deal, and so unless WGN-TV can bid successfully for the rights to broadcast a schedule of games, the Cubs will be entirely off WGN for the first time since prior to the 1948 season.

No one is quicker than me to shine a light on the duplicitous business practices of owner Tom Ricketts, but there is nothing wrong with finding a way to maximize his broadcast revenue stream.  It accounts for approximately $60 million for the company, and that’s a significant chunk of cash for a family that is finding it increasingly difficult to entice fans into investing in the third highest ticket prices in baseball to watch a bottom feeding team.

Every adult my age in Chicago says they ran home to watch the end of the Cubs game after school, but I really did.  The mile from school to home was a challenge for a seven-year-old, especially when Fergie Jenkins threw.  Jenkins almost never came out of a game, and he threw very quickly.  On days when he pitched, running hard might have bought me an extra half inning, which was occasionally the only half inning I saw.

We all have our favorite announcers of Cubs games, and I do too.  Brickhouse was a great guy who I met and got to know a little bit in the late 1980s at WGN Radio.  He used to come in to do a little voice work, and we would talk.

The first time I met him, he was holding a cake that he bought for his wife’s birthday, “Hey kid, this cake needs to be refrigerated.  Can you take care of that for me?  I’ll pick it up next week.”

I wasn’t going to say no to Jack Brickhouse, so I took it from him and said, “No problem.”  Did I know where the refrigerator was?  No.  Did I know if there was a refrigerator at WGN?  No.  But after 10 minutes of searching, I found one in an area not too far from Roy Leonard’s office.  The cake fit perfectly.

If I had known then what I know now – that all food is fair game in radio station refrigerators, and a cake as sweet as Brickhouse’s would have a life expectancy of 30 seconds after the owner set in on a shelf – I would never have guaranteed its safety.

The following Thursday, Brickhouse popped in to pick up the cake, and I recovered it unharmed.  Maybe the twine that tied the box together helped, but in every station I have worked at since then, a cake in a steel lockbox would have been gone in under an hour.

Brickhouse grew a mustache while I was at WGN, and he asked me if he should shave it.  I was smart enough to know that people who ask if they should change something about their appearance are looking for affirmation, not honesty.  I said, “Jack, I think it makes you look young and hip.  You aren’t my Dad’s Jack Brickhouse with that thing.  Keep it!”

Whether Brickhouse had a mustache or not was of no consequence to me, but I respected a guy that old making the effort to innovate a little bit.  He kept the mustache, but still looked exactly like Jack Brickhouse with a mustache.

The first time Brickhouse came in the sports office during my time there, he needed to use the phone to call his wife at Ditka’s, so he calls the restaurant and asks for her.  They have a two minute conversation, at the end of which he asks, “What are you drinking?”  After she answered, he yelped, “Hey, don’t get too far out in front of me!”

He was 72 years old, and he was talking to his wife like they were 22.  It was sweet and silly, and I loved getting a glimpse into the fun side of a broadcaster who was such a consistent companion during my youth.

That’s what all play-by-play guys are for their audience.  They are the touchpoint, the companion, and the emotional compass for our experience as fans.  A bond is forged between us that rivals any relationship in our lives – as strange as that is.

In 1989, WGN and the Cubs brought back Brickhouse, Lou Boudreau, and Vince Lloyd to call a couple of innings of a Cubs game.  The moment I heard their voices calling the game, I came unglued.

The thing I wanted as much that night as anything I’ve ever wanted in my life was for a Cub to hit a home run so Brickhouse could give us one more of his signature “Hey! Hey!” calls.

I can’t remember who hit it, but somebody crushed a bomb into the left field bleachers, and Brickhouse brought the A-level Hey! Hey!.  I cried like a baby.

That’s the link between broadcasters and their audience.  It’s not about the station, so I’m not too emotionally wrapped up in this decision.  Wherever the Cubs wind up, I’ll find them.

One thought on “Chicago Cubs vs. WGN-TV – Doesn’t Matter Because It’s About the Broadcasters, Not the Station”