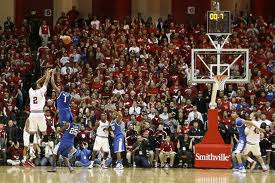 Indiana’s Christian Watford hits the shot that ended the Kentucky vs. Indiana basketball series that stretched back to 1969.

There was an interesting, but one-sided debate yesterday on Twitter about Kentucky’s lack of desire to play Indiana at either Rupp Arena or Assembly Hall after the UK 73-72 loss to the Hoosiers in Bloomington on December 10, 2011.

Dan Dakich challenged Kentucky fans with logic, and Kentucky fans responded – as they always do – with poorly constructed blather.  There are good Kentucky fans who don’t allow passion to cause zealous defense regardless of reason, but most are not vocal on Twitter.

Kentucky refuses to continue the home and home series because they can fill Rupp Arena by scheduling a team of elderly hobos so why risk a loss without a neutral site payday, and Indiana will not accept a supposed offer made by Kentucky to play the series at a rotating neutral site.

The discussion of how and why the series ended bubbled back up because Indianapolis will host the State Farm Champions Classic next December matching Kansas vs. Kentucky and Duke vs. Michigan State.  This year’s event will be played in Chicago next Tuesday.

There is nothing wrong with made-for-TV match ups, which puts some cash in the athletic department’s coffers.  Given the amount of money coaches are paid these days, playing a couple neutral site cash games makes sense.

But don’t the season ticket holders and the students deserve some decent home hooping prior to the beginning of the conference season?

What do Kentucky fans get for their investment in season tickets?  Games against UNC-Ashville, Northern Kentucky, Robert Morris, UT-Arlington, Cleveland State, Eastern Michigan, Boise State, Belmont, and finally a game worth the price of admission against Louisville.

And how about Indiana’s ludicrous non-conference home schedule against Chicago State, LIU Brooklyn, Samford, Stony Brook, Evansville, North Florida, Oakland, Nicholls State, and Kennesaw State?  It’s even worse than UK!  Wouldn’t college basketball be a lot more fun if the two sets of opponents for Indiana and Kentucky played each other, and the Hoosiers and Wildcats faced off, and played some similarly talented teams?

Of course, it would.  But Kentucky didn’t want that.  They want to fill their schedule with poorly funded sets of players from schools who have never sent a player to the NBA.  Every once in a while, UK runs into a splendid performance by a team like the 2007-2008 squad from Gardner Webb, and they get their comeuppance.  It doesn’t happen very often.

Kentucky’s behavior in refusing to play Indiana on campus shows its desire to keep fans from seeing decent basketball for their hard earned money, but fans in Lexington are so blue blind that not only do they continue to buy season tickets, they defend coach John Calipari for refusing to play Indiana home and home as though it’s the right thing to do.

That’s the madness that drives UK hoops.  The convenience of watching two excellent teams in person is reviled in favor of made-for-TV events in Chicago and Indianapolis.

Indiana fans aren’t filled with the same level of self-righteousness (how could they be?).  They would rather play UK in Lexington and Bloomington, and their biggest criticism of Tom Cream is the marshmallow soft non-conference home schedule.

The Big Ten is trying to mandate that football teams schedule tougher teams in September because the MAC schedule played to prepare for the conference schedule is not good for anything but coaching careers.  They should bring the same focus to basketball, and a great place for the work to start is the continuation of the Indiana vs. Kentucky series.

That Calipari has decided that he knows more about what’s good for UK Basketball than Adolph Rupp, Joe B. Hall, Eddie Sutton, Rick Pitino, and Tubby Smith (I’m conceding he knows much more about what is good for UK than Billy Gillespie), is insulting to the legacy of what is supposed to be an elite program.

Win or lose, Indiana vs. Kentucky is good for fans, and great for college basketball.