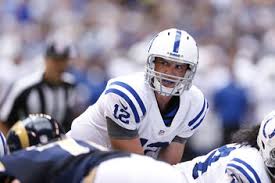 The St. Louis Rams appear to be a typically mediocre team.  Since 2004, the level of misery they have heaped upon the fans of that river town is beyond measure.  The worst five-year run (15-65) in the history of the NFL was followed by 2012’s 7-8-1 effort, and they appeared to be a team on the come.

Not quite.  The Rams are 3-6, and appear to be in line for yet another top ten spot in the NFL Draft.  In fact, with the Washington Redskins 3-6 record after last night’s collapse against the Vikings, the Rams could have two top ten picks.

Rolling into Indianapolis this weekend buried in the midst of a three-game losing streak, the youngest team in the NFL is still trying to figure out who and what it is.

Losing franchise quarterback Sam Bradford to a torn ACL in Carolina three weeks ago hasn’t helped matters, but the Rams were flawed before that.  Bradford has been a disappointment, and while Kellen Clemens isn’t very good at holding on to the ball, the chasm in talent between Bradford and Clemens is not exactly like what the Colts saw in Dan Orlofsky when Peyton Manning sat out the 2011 season.

But don’t sleep on the Rams.  There is a lot of talent on the field, especially on the defensive side of the ball.  Third-year defensive end Robert Quinn is an edge rushing beast, Janoris Jenkins is capable of making plays (last year, he scored four touchdowns on interception returns – only one from tying for overall team lead in TDs), and OLB Alec Ogletree is learning on the job while making both great and terrible plays.

This is not the walkover Colts fans see.  Given their first half gauntlet, it would be nice to have a game to enjoy as a no-sweat contest, but they will have to wait for the season ender against the truly brutal Jacksonville Jaguars for a walkover.

Here are the five things the Colts need to do to leave Lucas Oil Stadium 7-2:

The Colts must help left tackle Anthony Castonzo keep Quinn from getting to Andrew Luck.  Quinn has the second highest grade in the NFL on profootballfocus.com for defensive players, behind J.J. Watt.  Colts fans will remember Dwight Freeney as a young man getting the corner against Ravens LT Jonathan Ogden.  That is exactly what’s possible Sunday.  Quinn can get rolling and cause Freeney-esque havoc.

The Rams are really young, athletic, and undisciplined.  They tend to err at exactly the wrong time, and they aren’t very good in the red zone.  In just over 2 1/2 games, Clemens is 4-10 for 24 yards, and one touchdown.  On the ground, the Rams have a total of two TDs – both came last Sunday against the Titans.

No, the Rams aren’t very good, and the Colts should win, but at some point the switch will flip for the Rams, and they are going to find themselves.  It’s unlikely to come this week, but when it does, the Rams are going to start winning games in bunches for Jeff Fisher.

Colts fans will recall that a cornered Jeff Fisher is a dangerous Jeff Fisher.  A loss virtually assures another unsuccessful season in St. Louis, so expect the unexpected.