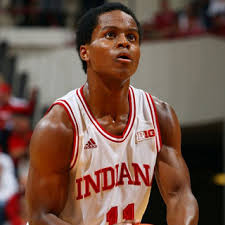 Yogi Ferrell is playing like the leader and assassin Indiana fans were right to expect this season in Bloomington.

After beating their first four opponents by an average score of 93-69, fans have learned a little bit about the 2013-2014 Indiana Hoosiers.

The highly touted freshman class has performed as advertised, and the sophomores have also responded to the challenge of replacing the 70+% of the offense that moved on through graduation or transfer.

Fans have also seen some inconsistency and defensive lapses from this very young Indiana squad.

Noah Vonleh has exceeded expectations by posting double doubles in the first four games of the season – the first Hoosier to do that since D.J. White in 2007.  Yogi Ferrell has shown that extra work in the gym firing up threes pays off by shooting 40% from beyond the arc and averaging a team leading 18 points per game.

There has been bad too.  In the three blowout wins – all 90+ point efforts, Indiana has posted single digit assist totals.  The important thing in offense is that the ball goes in the bucket.  How you choose to put it in is about style.  If Indiana scores 105 points against Samson with only nine assists, why should fans care?  Well, beating people off the dribble isn’t going to be possible against good defensive teams and putbacks will be more difficult.

Here are the questions Indiana needs to answer to enjoy a successful follow-up to a Big Ten Championship season:

Just what defines success for the Hoosiers this season?

If Indiana is an elite program again, every season should begin with the goal of winning a championship, but Indiana is not elite again – yet.  The Hoosiers have made it to the Sweet Sixteen the last two seasons, and that beats the hell out of the results of the three previous seasons, but elite teams hang banners.  Indiana has not given the five NCAA banners a little brother since the last was hung in 1987.

That allows a recalibration that accounts for the team’s youth.  A realistic number of wins is 20.  Indiana wins more than that, great, the season is a success.  Less, the Hoosiers swung and missed.

Will Jeremy Hollowell become a consistent positive force on either end?

Hollowell has always appeared to be a laconic and disinterested basketball player.  In high school and through the summers, Hollowell looked like he was waiting for a parent to pick him up to take him to the dentist while he was on the court.  That’s not necessarily bad.  Derrick McKey looked like that, and he was one of the best defenders in the NBA during a long career.  But with McKey, there was never any question among those who knew the game that he was a great asset.  With Hollowell, that’s not clear yet.

He has the body and measureables, but so far this season, he’s 11-28 from the field, and has yet to turn the ball over less than twice in any of the four games Indiana has played.  Like all Hoosiers not named after a lovable cartoon bear, Hollowell is not a big assist guy.

The question with Hollowell is whether fans can believe their eyes when they see some of the worst body language on a Hoosier since Richard Mandeville, or whether his fire burns far enough beneath the surface that it’s completely hidden from view.

Can Will Sheehey accept that Yogi Ferrell is the leader of this team?

Just as with an NFL franchise, things run more smoothly when the point guard is the leader.  Ferrell has always be the leader of the teams for whom he played.  He is steady and driven.

Sheehey can be uneven and occasionally allows his emotions to get the better of him.  If Sheehey tries to migrate into a role where he creates offense for himself, the result could be an unraveling of the team first methodology that is best for basketball success.  Sheehey is a talented complimentary player.

If he is happy with that, he can be an outstanding piece of the puzzle for the Hoosiers.

Click here to make the best dentist in Indiana your family dentist!

How quickly can Troy Williams and Luke Fischer develop into excellent defenders?

If you project the best versions of Ferrell, Williams, Sheehey, Fischer, and Vonleh into the starting lineup, that group can compete for a Big Ten title.  Ferrell and Vonleh are pretty damn close to that level of player.  Fischer needs to be able to raise his left arm over his head, and Williams needs to limit turnovers and negative defensive plays.  He’s a ball hawk averaging two steals per game, but jumping into the passing lane unsuccessfully is going to give teams like Michigan State, Michigan, and Ohio State a huge advantage.

Williams has all the potential in the world, and Fischer proved himself as a winner during back-to-back undefeated seasons in Wisconsin as a high school junior and senior.

Can Indiana play against a quality zone and score?

Because of the rule changes in college basketball, teams are going to be more likely to use a zone, and against the zones of LIU-Brooklyn, Indiana had trouble functioning as they scored a season low 73 points – the only time they scored less than 90.  For my taste, Indiana runs a complicated offense against a 2-3, but Tom Crean is a smart guy, and if the key to creating open looks against a zone was as simple as getting the ball into the middle, that is what he would tell the Hoosiers to do.

The loss to Syracuse still stings, and if you listen very carefully at sports bars across Indiana, you can still hear the echoes of fans yelling, “Get the ball to Zeller in the middle!”

Whatever offense Indiana uses to make teams pay for running a zone, it needs to be successful because they are likely to see a lot of it.