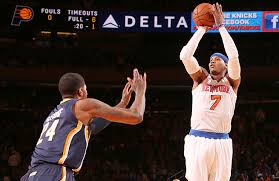 Carmelo is going to get his tonight, but the Knicks are unlikely to get their’s tonight against the Pacers.

The Pacers have won nine of ten, while the Knicks are 3-7.  The causes for both results are many, and vividly display the differences between the two franchises.

The most important difference is at the top of the food chain.  The Pacers are led by a quiet, successful, and respectful man who knows that ownership is about setting a standard and hiring a staff that is committed to achieving it.  The Knicks are run by a buffoon who was born on third base and believes he tripled.

Pacers owner Herb Simon leaves the heavy lifting to president Larry Bird, general manager Kevin Pritchard, and advisor Donnie Walsh.  Knick owner James Dolan is a more impetuous version of Dallas Cowboys owner/GM Jerry Jones.  He makes nuts and bolts decisions about the construct of the team, and dooms them to mediocrity with his undisciplined scheming.

The teams are as different as their owners.  The Pacers were interviewed on ESPN today as a unit.  The network asked to interview Bird and all-star forward Paul George.  Bird declined, and George asked that the interview include the rest of the starters and coach Frank Vogel.

The NBA is marketed as a league of single-named stars like Kobe, LeBron, Dwight, and Carmelo, but lasting success comes to the teams that link arms and march together.  The San Antonio Spurs have achieved consistent excellence by playing team-first basketball, and the Pacers are emulating that model.

The Knicks are completely lost in a conscious effort to isolate offensively.  That’s Carmelo Anhony’s game.  Over the course of the first 10 games of the season (minus one outlier game where he scored 45 points on 30 shots), Anthony has averaged 22.2 points on 19.8 attempts.  That’s not a productive ratio, and allowing your best player to score only 1.13 points per shot while firing at will is not going to yield many wins.

Basketball is a game played best by really talented players with specific measurables who understand that focusing upon putting teammates in a position to succeed is significantly more important than finding their own groove.

Click here to find the best dentist in Indiana, and learn how he can be yours!

Tina Fey says that everything in her professional life unlocked when she discovered that focusing on the other actors in a scene were more important than she was.  At that point, writing became easy.  In basketball, winning isn’t guaranteed through a team first attitude.  The parts of the whole must be talented, tall, long, and fast, but without the emotional health and rhythm the Pacers have developed, failure follows.

The individuals who comprise the Knicks continue to indulge in that ‘greed is good’ insanity that has festered through our society over the last 40 years.  ‘Greed is good’ works only when all are greedy – and as a result, miserable.  As soon as someone figures out that greater efficiency and productivity comes to those who give rather than take, the game is flipped and the spoils go to those who work for each other.

That’s what fascinates us about sports.  Teams and players mirror who we are and what we do, but an NBA game takes only 48 minutes, while our professional lives takes considerably longer (hopefully).  A season lasts 82 games, and there will be enough adversity and success within those 82 games to test the resolve of a team.

Basketball is the ultimate test of character because there are times when selfishness is rewarded, and that momentary affirmation can drive a weaker mind to indulge with self-annointed impunity.  There are even times when selfishness can be appropriate, but as a philosophical choice, it almost always results in failure given reasonably level talent.

That is why a zen master like Phil Jackson can be so successful, and also why Frank Vogel is the perfect leader for the Pacers.  Vogel has no interest in the spotlight, and never treats his players or people in the community like he believes he is something special.  It’s that understanding that others need to be more special than he that sets a profound example for his team.

The Knicks are unraveling while the Pacers succeed.  That’s not a coincidence or the result of happenstance.  It’s because of a conscious decision by the Pacers to succeed as a unit and forfeit the right to behave as me-first prima donnas, while the Knicks refuse to let go of what each individual perceives as his greatest strength.

And the difference between the Pacers and Knicks starts right at the top.

One thought on “Indiana Pacers Game Tonight Vs. Knicks – the Reason the Knicks are 3-7 While Pacers Are 9-1 Is Leadership and Attitude”