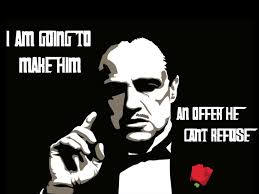 Everyone is sharing their thoughts about the unfulfilled history we missed as John F. Kennedy was assassinated 50 years ago today, so I want to escape from the relentless sadness of a day like today where everyone is marking the moment the best of humanity met the worst, and write something totally disposable and of very limited societal value..

It’s difficult for me to have a conversation without relating something said to either a Seinfeld episode or one of the ten movies listed below.  There are phrases I use without any recollection that they came from a moment in a movie I saw 20 years ago.  People call me on it occasionally, “Hey, didn’t Al Pacino say that in ‘Author, Author’?”  That’s usually from someone who spent as much time watching HBO in 1984 as I did.

“Author, Author” is a little too arcane for inclusion on this list.  It came in at #87, so it will be in the ninth top ten quotable movies list before we get to the wit of Pacino’s character, single dad/playwrite Ivan Trevalian.  Don’t hold your breath for that list.  The day that I write ‘Top Ten Quotable Movies, Ninth in the Series” will be the day this site is shuttered for uselessness.

When I was a program director for 101ESPN in St. Louis, I mandated that everyone on the staffsee “The Godfather” and “Godfather II” because I have no interest in people who are incapable of understanding how the world works through the Corleone Family’s eyes.  I bought copies for some as ‘gifts’.  I also tried to enforce a mandate that everyone read a book by Hunter S. Thompson, but Thompson is at the top of an entirely different list for a different day.

Here are the top ten movies from which you are most likely to hear me quote phrases as though they are my own.  Some of these films have many quotable lines, and others have only one, but the list is comprised not of the best movie quote, but the most quotable movies.  Some are terrible movies made fun with strange dialogue, and others are masterpieces.

I have chosen to omit all Will Ferrell movies because they would fill half the list, and how much much would that be to write.

The Godfather – This movie is perfect.  The writing, music, lessons, everything – just perfect.  Best movie of all time – period.  You watch “Citizen Kane” 10 times, and then “The Godfather” 10 times.  Tell me which you would prefer to watch an 11th time.  The entire context of my favorite quote is too convoluted to share here, but a man asks for Don Corleone’s help and offers him cash for it.  The Don’s son gets honest with the man, and after the meeting chastises him, “Never tell anyone outside the Family what you are thinking again.”

Dumb and Dumber – This is a total classic with endless quotes.  I am remiss for leaving it off the first list, but sometimes I get a little high and mighty with my Patrick Swayze obsession.  “We got no food, no jobs… our PETS’ HEADS ARE FALLING OFF!”

One of the best ever.  I may have discounted this at first because somehow the Farrelly Brothers forgot how to be funny.

Slapshot – With apologies to “Hoosiers”, this is the best sports-themed movie of all time.  It is a comedy about a minor league hockey team about to fold.  Paul Newman is excellent as the sort of dumb player-coach, but the movie is stolen by former hockey players turned actors who play the Hanson Brothers, three wildly enthusiastic thugs.  My favorite character in the movie is Johnny Upton, the only sane guy on the team.  When he sees the psychotic Hanson Brothers play, he says, “these guys are a f**king disgrace!”  Easy and compact, this quote is applicable in almost any bar, Monday thru Wednesday.

Caddyshack – Where do you go wrong here?  Doug Kenney, Harold Ramis, and Brian Doyle Murray made every scene perfect.  Over 30 years later, it hold up.  College kids quote it today like 50 year-olds used to when they were in college.  Every line from Rodney Dangerfield, Bill Murray, and Ted Knight is a gem.  Dr. Beeper is funny when he tells his assistant to snake a tube down a patient’s throat and that he’ll be there in five or six house.  My favorite though is from the elderly Mrs. Havercamp.  She and her very old husband are invited to Judge Smails house for tea.  Smails is upstairs trying to kill Danny, who was caught sleeping with Smail’s niece.  A chase ensues, and a tea service is knocked from the butler’s hands.  It falls from the second floor to the entry floor, and Mrs. Havercam says, “That must be the tea!”  Any time dishes break in a restaurant or bar, I trot this one out.

Animal House – This entire movie is quotable.  Such is the greatness of the writing by Doug Kenney, Harold Ramis, and Chris Miller.  But the most inspired to me isn’t a quote at all, but the moment that in a party fueled haze, Bluto pour a jar of mustard on himself.  Failing that obscure moment, I like, “Sophomore dies in kiln explosion? Oh My God! I just talked to her last week… She was going to make a pot for me.”

Road House  – You have likely noticed that Patrick Swayze’s ability to deliver a trite and silly line has a special place in my heart.  Roadhouse is an outstanding late night cable choice for two reasons – it marked the crest of the very sharp Kelly Lynch hotness curve, and Swayze is at his insipid worst as a patient in an emergency room suffering from a knife wound.  Lynch is a doctor who offers him a shot for the pain.  Swayze declines with a glance, and the most illogical of all movie quotes, “Pain don’t hurt.”  Nice anytime someone asks if something hurts.

Throw Momma from the Train – This is a comedy that isn’t top of mind among the best of the 1980s, but I love it.  The classroom scenes with Billy Crystal as the professor are hilarious.  Crystal plays understated for the only time in his life, and is perfect as he asks his doltish students to read their assignments aloud.  My favorite quote though is from Anne Ramsey’s Momma character.  She hollers at Billy Crystal, who is obviously white, “Get out of my way, you black bastard!”  It’s random, weird, and has no rightful place in the scene, which makes it all the better.  Need to take care where and when this is used.

Stripes – This is the all-time Bill Murray tour de force, and I thought every word out of his mouth was hilarious, but my favorite character in this movie is Dewey Oxburger, played by the great John Candy.  On his way on to the bus to take him to Camp, he asks two female military policemen, “Stewardess, is there a movie on this flight?”  As he gets off the bus at camp, he says to to Captain Stillman, “How’s it going, Eisenhower?”

Red Dawn – The second Patrick Swayze movie on the list.  I love Swayze because he gave the same energy to poorly written garbage as he did high quality lines.  He seemed to have no crap barometer at all, and given that he was almost always in bad movies, I admire him for committing 100% to everything he did.  Red Dawn was a horrible, yet entertaining movie about a Soviet invasion of America.  I feel like I’m cheating you out of a full movie filled with jingoistic claptrap by choosing one line or scene.  Swayze, as Jed, has just a small bit in the scene I love about how the war started:

Loverboy – Vic Tayback was at the very end of a moderately successful acting career (and life) when he agreed to play Harry Bruckner, the husband of a woman who orders from Señor Pizza because the delivery boy, played by McDreamy from “Grey’s Anatomy,” doesn’t only deliver sausage when it’s on a pie.  I haven’t seen the movie in 20 years, but my recollection is of Tayback yelling, “Ya porkin’ her?!” between 12 and 15 times.  Saying it, or hearing the great Paulie Balst say it never fails to make me laugh regardless of the situation.

The Outsiders – This movie is wretched, but there are some piece that fit a situation every once in a while.  My favorite scene is when Johnny (Ralph Macchio) is dying a painful death because he was nearly incinerated.  He looks at C. Thomas Howell’s character and says, “Stay gold, Ponyboy. Stay gold.”  For using this quote, you get bonus points for quoting the same line from the insipid book of the same name.  Swayze is in this movie too.  This quote is great when a guy vomits or otherwise disgraces himself.

There are many more.  The Marx Brothers classic “Duck Soup,” “Monty Python and the Holy Grail,” and “Gone with the Wind” have many usable lines, but I have a fondness for Swayze driven junk that bumped them – and “Scent of a Woman” from the list.

4 thoughts on “Kentsterling.com Top Eleven Favorite Movies to Quote From”