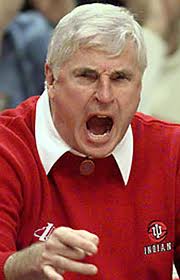 Jeremy Hollowell would have seen a lot of this last season as Bob Knight loudly encouraged him to play somewhere else.

Bob Knight hasn’t been the head coach at Indiana in over 13 years.  That means it’s unlikely any kid currently in high school can recall a time when the big man in the red sweater prowled the sidelines for the Hoosiers.

But that doesn’t mean Knight isn’t still a figure looming over the Hoosiers.  People who learned the game of basketball by watching Knight’s Indiana teams still view Indiana through those lessons.

Knight was very generous with students and fans in teaching them the game.  There were a couple of seasons when Knight would reveal the precise game plan for his opponent during the pregame.  I never understood giving the opposing coach that advantage, but maybe that was the point – Knight showing them that he could kick their asses after telling them exactly how he would do it.

What I know about basketball, I learned with watching Knight’s teams and listening to him and members of his staff talk about the game.  I’ve learned a lot since from Dan Dakich, which is fruit from the same tree.

When I watched Indiana beat Washington last night in the first round of the 2K Sports Classic, I yelled at the TV almost every time Jeremy Hollowell touched the ball, and I wasn’t thrilled with much of Will Sheehey’s play either.  Hollowell drove into an obvious charge, and Sheehey yelled at Luke Fischer after a brutal no-look behind the back turnover.

Both plays would have been reason for a Knight explosion, and I can’t help but evaluate Hollowell and Sheehey through a prism that is heavily influenced by Knight.

In my mind, Indiana Basketball is still partly defined by the impatience Knight showed for mental errors, and Knight would never have allowed Hollowell to continue to play while dumping offensive possessions through mental indifference.

The game of basketball has changed over the past 20 years, or more specifically the kids playing the game have changed.  They don’t respond positively to what they perceive to be an ogre barking anymore.  They have been coddled, pampered, and told they can do no wrong for their first 18 years, and are not emotionally equipped to hear blunt criticism – particularly in the way Knight dispensed it.

The younger IU fans look at the Hoosiers win against Washington as a sign that the Hoosiers are functioning at a high level.  The guys older than 30 saw last night’s game as an indictment of a system that does not penalize imprecise play.

I got a text last night from Marty Jenkins, a college basketball reporter for 101ESPN in St. Louis.  Marty, 30, is originally from Carmel, Indiana, and he loves the Hoosiers.  He wrote, “Dear God they look good.  I know it’s Washington, but IU looks really solid.  Lots of talent, confidence, and depth.”

My initial thought was that Marty had lost his mind.  Didn’t he see Hollowell’s four turnovers and three fouls – all of which could have been avoided?  Didn’t he see the three Sheehey turnovers?

I had a lot of conversations with Marty when I was in St. Louis, and can anticipate what he would say, “Didn’t you see Indiana shoot 52% from the field and 86% from the line?  Didn’t you see Troy Williams put up 22 and eight?  Were you in the can when Noah Vonleh scrapped for his 18 and nine?  And what about the wealth being spread among all the starters with everyone shooting between 10 and 13 times?”

Marty would be right.  Indiana was charged with only 13 turnovers and scored 102 points, so it wasn’t all bad.  Williams and Yogi Ferrell were outstanding, but the Knight generation sees the reasons Indiana might lose, not the plays where the team functions as it should.

That makes Tom Crean’s job more difficult than it would have have been if he followed a less demonstrative coach so generous with teaching basketball to yokels, who now all believe themselves to be experts.

These Indiana Hoosiers have very little in common with those who played for Knight during his last five seasons.  First, this team was assembled by a coach who recruits with energy.  Second, there is a tolerance for bad plays from young players still learning the game.  Third, Hollowell isn’t playing at UAB or Austin Peay.

Sloppy basketball still drives me crazy, but Indiana is a different team led by a different coach.  The Hoosiers are 5-0, so who am I to bitch?