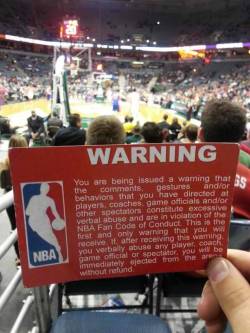 There is a story on probasketballtalk.com outlining a system of red cards used at NBA arenas to try to curb excessive haranguing of players, coaches, game officials, and other spectators.

If this system had been in place at Wrigley Field from 1987-1993 when I frequented 20-30 games per season, I would have earned enough of the cards to wallpaper my den.  Yelling at Gary Carter as he tried and failed to reach 300 career home runs became an obsession for several games, and my frustration over the Cubs mediocrity bubbled over frequently.

Yelling at anyone and everyone (except Andre Dawson, Greg Maddux, and Ryne Sandberg) was par for the course.

I was always a loudmouth at Wrigley, but when friend Len Totlan threw out the first pitch at a game I attended, I decided to experiment to see at what volume I needed to yell in order for Len to hear me.  Surprisingly, with a nearly full house, he reported that from the mound he could hear every word I yelled from 35 rows up.

Knowing my words were not being wasted on the drunken rubes who paid top dollar for their seats was all the motivation I needed to share every bit of cleverly worded disdain I could muster.

I was never thrown out of the park as I was as quick and to the point as I was angry, and when I was done I never betrayed that I was the guy yelling inane and non-profane invective at Lenny Dykstra and Chris Sabo.  Sometimes, I would implicate others with a sideways glance as ushers scanned the crowd.

As for the NBA red cards, I’m not sure whether they will serve as the incentives they are intended to represent.  Nearly everyone I know under the age of 60 will see these red cards as collectors items – a sign that they pushed their fun right up to the limit.

Consequences cause behavioral change, not collectors items that fans can hang in their cubicles with pride.

There is a great story about a fan who attended a game with former WIBC morning man Jeff Pigeon who picked on Magic Johnson throughout a game.  Magic became fed up with the abuse, stared at Pidge and yelled, “You want to meet me outside after the game m*****-*****r?”  Pidge didn’t know whether to laugh, crap, or go blind, as he hadn’t said a word.

That episode represents a serious disincentive, and served its purpose as a corrective measure that got the result it was designed for.  The last thing Pidge and his friend wanted was to meet up with an angry Magic.  They left quietly.

If NBA Commissioner David Stern wanted to curb fan abuse, he could have taken care of the problem nine years ago.  Ron Artest and Stephen Jackson stormed into the stands and clocked several fans when one of them threw a cocktail at Artest as he laid on the scorer’s table.  Instead of suspending many Pacers for their role in the ensuing brawl, he could have said, “That’s what they deserved.  You don’t want to get hit by an enormous professional athlete, behave yourself.”

The red card system would be completely unnecessary.