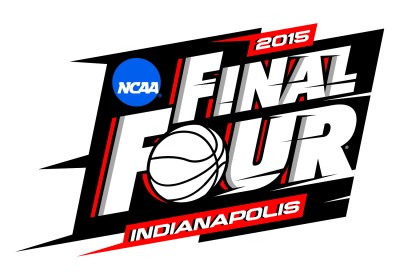 One of the great things about living in Indianapolis is that beget to enjoy more great sporting events per capita than any city in the world.  Indy is unlikely ever to host an Olympics or World Series, but we are blessed with almost nonstop spectator events.

The NCAA will host its signature Final Four event here in 2015, and today at the Brand Building on the NCAA Headquarters campus the logo was unveiled.  They all look mostly the same, and this one hits my sweet spot for logos.  It’s clean and simple.

Complicated logos are a lot like complicated show names for radio or TV.  Thank about the great TV sitcoms of the last 30 years – Cheers, Seinfeld, The Office, Friends, and 30 Rock – all very simple names.  How about Ron Howard films? Splash, Gung Ho, Rush, Frost/Nixon, Ransom, Backdraft, The Paper, Apollo 13, and Parenthood.  Simple works.

Simple works for Indianapolis as a host city too.  The hotels are near the bars, and both are within easy walking distance of the venues.  The people are welcoming and pleasant without any pretension.  Downtown is a 12 minute straight shot from the airport, and while it doesn’t make any difference to fans – the way in which the Indiana Sports Corporation, city government, county government, and state get along makes getting things done a breeze for the NCAA, NFL, NBA, and Big Ten.

Why anyone would want to go elsewhere is a mystery.  Indy was built to host major events, and that’s why it over delivers every time.

Simple and fun – that’s how Indy rolls.  Is it any wonder why I call this city home?