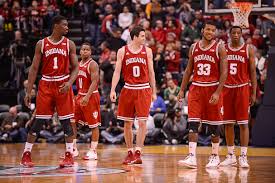 Until these five players learn to trust one another, Indiana will lose against the Notre Dames of college basketball.

The Hoosiers lost to Notre Dame in the Crossroads Classic 79-72, leaving fans to wonder who in the Big Ten they might beat.  Hoosier Hysteria doesn’t only refer to what happens on the court.  It’s also an apt adjective of what fans feel after losses where the players appear to be unwilling to do what’s necessary to compete.

Indiana is 15 days away from its Big Ten opener at Illinois, and after a loss against a team that three days before lost at home to the North Dakota State Bison, it’s hard to imagine the Hoosiers putting together a conference season that could earn them a return trip to the NCAA Tournament.

A record of 8-3 isn’t all bad, but the only school they have beaten that most people have heard of is Washington.  After what fans will consider wins earned through scheduling against Nicholls State and Kennesaw State, Indiana will begin its Big Ten schedule with a record of 10-3.  That will leave the Hoosiers a 10-8 conference record short of 20 wins and being relatively sure of a reasonable expectation of an invitation to March Madness.

The problem with Indiana isn’t length, size, athleticism, or any other measurable, but all the other stuff.  Sure, the Hoosiers lost a lot of scoring and rebounding as graduation and early departures for the NBA left a massive statistical void, but what is especially missed is leadership and emotional investment.

On Saturday afternoon, Indiana played like five fingers attached to different hands instead of a tight fist.  Defensive communication was awful, and offensively they had trouble (again) attacking Notre Dame’s 2-3 zone.

Worst of all, Indiana appeared indifferent to the result of each defensive possession, if not the outcome of the game.  It’s easy to watch a game and guess at the cause of problems during a loss, and estimating the needs that can turn things around.  Here are some of the thoughts that have found their way into my email box by passionate fans in need of a outlet for their disappointment:

Not sure how accurate any of those thoughts are, but watching the loss against a team that had been beaten by the Bison in South Bend left fans with a a lot of unpleasant questions and assumptions.

The proof will be in the pudding as the Big Ten season unfolds, but the team that refused to compete and communicate at a high level Saturday isn’t likely to beat a lot of teams in America’s premier basketball conference.

Winning is tough in college basketball – really tough.  Indiana has yet to figure out how to beat a good team this season, and with expectations through the roof the last two seasons, the Hoosiers were unable to advance beyond the Sweet Sixteen.  That’s not bad, but 26 years since a national championship is starting to become a Cubs like run of futility.  After all, this is Indiana.

Talent doesn’t always triumph, and the best thing about freshmen is that they become sophomores.  The sophomores need to become sophomores too.  And all need to find some joy and toughness out on the floor.  Great basketball is not played by unhappy and unfocused men.

This season can go one of two ways for several teams in the Big Ten, and right now its a coin flip which way it goes for Indiana.