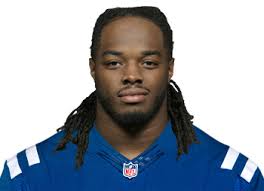 Trent Richardson had his best game as a Colt yesterday. Whether that makes him more or less likely to play well against the Chiefs is anyone’s guess.

The Indianapolis Colts are enjoying one of the more enigmatic NFL seasons in history.  They are capable of looking terrible while winning, and being very competitive during a loss.  Yesterday’s win against the Houston Texans was the first since September 29th that the Colts won by a margin greater than one possession.

Since the bye week, the Colts are 4-3 with two wins each against the Texans and Tennessee Titans, and losses to the St. Louis Rams, Arizona Cardinals, and Cincinnati Bengals.

What we don’t know about yesterday’s big win is whether it was more a matter of excellent execution by the Colts, or abject malaise from the Texans as they played their first game under interim head coach Wade Phillips following the expulsion of Gary Kubiak.

For the second consecutive week, the Texans committed 14 penalties.  Not that the Colts needed the bonus yards, but they sure didn’t hurt.

And now, the Colts are no longer looking at the AFC playoff picture and saying that they aren’t playing for something.  Going into the weekend, the Colts appeared to be locked into the fourth seed as the division champ with the worst record.  With losses by the Denver Broncos, New England Patriots, and Bengals, the Colts slide into a tie with the Bengals, are one game back of the Patriots, and two behind Peyton Manning and the Broncos.

Suddenly, the Broncos are tied with the Kansas City Chiefs, so this Sunday’s game at Kansas City will go a long way toward determining the winner of the AFC West and which grabs the #5 seed.

New England is at Baltimore while Minnesota travels to Cincinnati in Week 17.

A win in Kansas City seemed unlikely until the Colts smothered the Texans.  The offensive line moved people in ways they had been unable to since the win against the Broncos just prior to the bye, and the defense allowed a season low 132 passing yards for the Texans.

Quarterback Andrew Luck was hardly magical, but he was good enough – 19-for-32, 180 yards, two TDs, and one pick.  Maybe best of all, Luck was sacked only once for a loss of one yard.

Speaking of sacks, OLB Robert Mathis posted another strip sack that resulted in a safety.  It broke the all-time single season franchise record as well as the career record for sacks.  Mathis spent nearly his entire career excelling in the shadow of Dwight Freeney, but that is true no longer.

Trent Richardson enjoyed his best game as a Colt with 64 yards on 19 carries – the first game in two months that he’s carried the ball nine or more times.  Donald Brown’s stinger opened the door for Richardson, and Richardson marched through that doorway and nice holes all afternoon.  He also had four catches for 38 yards, making this the first time he has accounted for more than 100 yards from scrimmage since the trade with the Browns brought him to Indy.

Click here to trust your teeth only to the best dentist in Indiana – Dr. Mike O’Neil at Today’s Dentistry

So now the Colts roll out to KC where the biggest challenge will be to control quarterback Alex Smith, who yesterday posted the first perfect quarterback rating of his career with 17 completions in 20 throws for 287 yards and five touchdowns.  The odds of Smith doing it in two consecutive weeks are remote after not doing it once in his first 93 games, but that doesn’t mean he won’t be efficient.

Whether it’s the good or bad Colts walk out of the tunnel in Kansas City we won’t know until game time, but the team that scored 20 first half points yesterday seems a lot more likely to compete against one of the best teams in the AFC on their turf than the group was was outscored 114-24 in the six games since the bye.

The Colts finally scored a touchdown in the first half yesterday – also a first since the bye.

Good luck trying to predict what the hell this team will do in Kansas City.  The only consistency is in their inconsistency.  They have beaten outstanding teams like the Broncos and Seahawks, and 49ers, and been hammered by the mediocre – like the Rams and Cardinals.

The Colts have alternated wins and losses since the bye, so logic would tell us that it’s their turn to lose, but logic doesn’t seem to have a lot to do with the Colts.