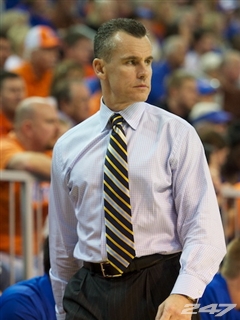 The most underrated coach in college hoops: Billy Donovan

My son texted me a couple of weeks ago to let me know the commentator for the Arkansas-Kentucky game started talking about Donovan. He informed me the announcer said Donovan was one of the top three or four coaches in the country and didn’t understand why he wasn’t talked about more in conversations about the best coaches in college basketball. My son didn’t text me this because he thought it was some revelation to us. He texted me because he’s heard his old man say the same thing for the last three years.

How can the coach of the #2 ranked team in the country and a team that cracks the top 10, 15, 20 yearly be underrated? Let me put this into perspective:

When Florida beat Kansas earlier this year, the Gators were ranked #19…19. Anyone who follows college hoops for a living should have known that Florida was better than #19…either that or this was to be one of the most loaded crop of top 25 teams in hoops history.

It’s a constant wait-and-see approach – or a not paying attention approach – that many fans and media have with Florida every year, and it baffles me. Last year when the Gators rose quietly to #2 in the polls, I asked my son (and I was dead serious), “Does ANYONE realize Florida is number two? I’ve heard more about every team in the top 10 than I’ve heard about Florida!” Yet, for some reason, the lack of attention and respect folks have for the program and Donovan compared to other top programs is a re-occurring theme.

Here’s another let me put this into perspective moment… This is what the entertaining Mark Titus of Grantland.com had to say about the Gators last week:

“For most of this season, I’ve felt like a doomsday picketer standing on a street corner, yelling into a megaphone that Florida is a national title contender.2 Don’t you people get it? Why is nobody listening to me?! The Day of Judgment is coming! Repent now or feel the wrath of Florida in March! Finally, at long last, the secret is out. Florida is as good as any team in college basketball.”

I completely understand how Titus feels. I’ve felt the same about the Gators program often over the years. But back to this year as an example, it’s not like they’re lurking quietly in a swamp. They’re on TV all the time. And they’re not out of sight during the non-conference portion of the schedule playing a bunch of cupcakes. They played at UConn, at Wisconsin, Memphis, Kansas, Florida State and Richmond. Donovan always schedules well. How the good Florida teams seem to sneak up on people is beyond me.

How can the coach of a team that’s gone to three straight Elite Eights, 3 National Championship games, won two National Titles, won eight SEC regular season or tournament championships and had 14 straight 20-win seasons be underrated and not mentioned consistently among the elite coaches?

How can a coach who consistently recruits with the best, makes players better at the college level and turns players into pros at a very proficient rate be underrated?

Yet, whenever people talk about the best coaches in the country, Donovan’s name rarely comes up. And no program that’s had the success Florida has had is talked about less.

People say Florida basketball doesn’t get the credit it deserves because it’s a football school. Frankly, it doesn’t matter what the reason is. The bottom line is Donovan has put together a resume that ranks right up there with the best “basketball schools” and coaches in the country – and better than many. Florida should be considered a basketball school because, well,  it is – at the highest level at that.

And for those who measure the success of a program by the number of players from that school who make it to the NBA, the Gators consistently rank among the top 10 schools that have players in the NBA. Gators currently littering the Association include Joakim Noah, Al Horford, Udonis Haslim, Corey Brewer, Chandler Parsons, Bradley Beal, Mike Miller, Erik Murphy, Matt Bonner, Marreese Speights and David Lee.

And in this one-and-done era that so many loathe, Donovan is doing it with teams that often have a perfect blend of veterans and youth. Four seniors start for this year’s team. Most of Donovan’s players stay all four years or long enough to make a lasting impact on the program. Joakim Noah and Al Horford stayed through their junior years. They could have very easily jumped ship, along with Corey Brewer, after their first National Title, but they didn’t.  Donovan repaid them for staying by making them better players. That’s a common theme when it comes to Donovan: players and teams getting better. Whether players stay because of Donovan, love for the university or whatever, that’s called a basketball program, folks.

Oh, the one one-and-done Donovan has had, Beal, carried the Gators to an Elite Eight appearance and what should have been another trip to the Final Four.

And it’s not just players Donovan makes better. He makes coaches better, too. Former Donovan assistants who are currently head coaches include Shaka Smart at VCA, Richard Pitino at Minnesota and Anthony Grant at Alabama.

Near the end of the broadcast of last Tuesday’s win against Missouri, a victory that assured the Gators of their 14th straight 20-win season, Dick Vitale chimed in on Donovan’s success. “I don’t know if I’ll be alive when it happens,” Vitale said, “but Billy Donovan will be in the Hall of Fame some day, no doubt about it.” I agree, Dickie V.

The “Rowdy Reptiles” weren’t so rowdy before “Billy The Kid” road into Gainesville. Frankly, they didn’t exist at all. The student section is merely a by-product of the Donovan era, a brick in the wall of success that he has built at Florida. Donovan has coached the Gators for 17 years now. He IS Florida basketball.

So, if you want to say Mike Krzyzewski is the best college basketball coach in the country, you’ll get no argument from me. But after that, no group of coaches – Izzo, Pitino, Boeheim, Calipari, Self, Williams – in a debate about the very best coaches in college hoops should be mentioned without including the name Billy Donovan. He is in that top tier.

4 thoughts on “Billy Donovan: The Most Underrated Coach in College Basketball.”