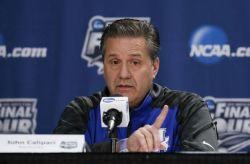 John Calipari will likely be back in Kentucky next year, but if offered the Lakers job, I suggest he TAKE IT!

The joke is that John Calipari is the college coach most ready to succeed in the NBA because he has the most experience coaching professionals.  True, but not the reason why he should leave Blue Grass for the high tides of Los Angeles to lead the Lakers back from the dead.

On the off chance that there is any truth at all to the seemingly absurd rumor it appears Calipari’s agent Worldwide Wes started via a Rex Chapman tweet prior to Monday night’s championship game, he should pursue the Lakers with the same vigor he uses to pursue NBA ready recruits.

Few jobs in sports are as difficult as being the head coach at the University of Kentucky.  Fan expectations are insane, and the recruiting grind of bringing in constantly churning group of McDonald’s All-Americans is daunting.  Miss on a class, miss the tournament, and piss off an entire state with no diversions but the Wildcats to occupy their attention.

Worrying about grades, kids making the right decisions, and finding the formula to congeal the disparate and incredibly talented parts into a team during the nine months they wait for NBA Draft eligibility are constant worries.

Without a doubt, positives outweigh the negatives as the basketball czar of Kentucky.  The pay is great, and legend status has been conferred upon Calipari by Big Blue Nation will provide a steady income for life.

But there have to be moments when Calipari sits in his office and wonders whether being a hero in Kentucky is the tallest             peak he can climb.  The highest level of basketball is played by grown men in the NBA, and after being viewed as a failure during his stint leading the New Jersey Nets must grate on a man who has succeeded everywhere else.

The Buss Family’s pockets are deep, and the allure for free agents to come to L.A. is huge.  Recruiting to the Lakers will be easier than recruiting to Lexington, and being 25-53 – just one game ahead of the last place Utah Jazz – has given whomever replaces Mike D’Antoni an excellent shot at exceeding expectations.

Whether Calipari is really being wooed by the Lakers or is simply trying to drive Kentucky toward offering an extension for $8-$10 million per year is another issue, but if there is fire behind all this smoke, he should run to LA to establish his legacy as a bonafide coach who can do much more than find ways to attract the best 18-year olds in America to UK.

If Calipari is ever going to leave Kentucky for a plum job in the NBA, now is the time.  After a five-year run that has been very prosperous (four elite eights, three final fours, two championship games, and one championship, Calipari will likely never be hotter.

The next couple of weeks will be very important in defining Calipari’s career as a coach.  He has climbed every mountain that exists in Lexington, and his decision to rewrite his failure as an NBA coach by building the Lakers from the ground up will share whether the pain over his experience with the Nets continues to leave a mark.

The money will be close to equal, but the ability to amend his brand may be too great to pass up.  It should be.  The Lakers job is special.

Leave a Reply to Warren in TN. Cancel reply