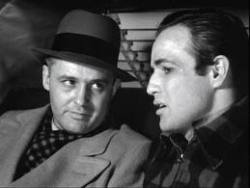 Current Northwestern quarterback Trevor Siemian balked at his chance to change the game. Too bad – he coulda been a contender.

Northwestern Football coach Pat Fitzgerald is never going to be portrayed on film by Lee J. Cobb, nor quarterback Trevor Siemian by Marlon Brando – and not just because both actors are dead.

Fitzgerald would never threaten to kill Siemian, as Cobb did with Brando in “On the Waterfront,” but he did ask his players to vote against forming a union.  The tacit message might have been inferred as, “Those who vote to unionize may find snaps hard to come by this season.”

“On the Waterfront” is a 1954 film depicting the difficulties for already unionized dock workers as Brando’s character fights the corrupt union boss (Cobb).  Day workers who complain about the conditions or pay get the freeze out and don’t work.  Those who toe the company line get paid.

Siemian came out against the tactic employed by former quarterback Kain Colter in trying to form a union so issues like lifelong scholarships and health coverage can include input from the athletes those policies directly affect.  He is quoted on the ESPN Chicago website, as being “treated far better than I deserve” at Northwestern.

It bears mention that Kolter never pursued unionizing the Northwestern football team until his eligibility ended.  Nothing to lose makes a man strong and reveals principles otherwise conveniently hidden.  That’s not to say that Kolter might not have seen the light if his professor had asked why football players aren’t considered employees a year earlier, but the timeline is what the timeline is.

So the boss, frightened by the specter of change, asks his charges to reject the opportunity for greater representation and perhaps a more expensive paradigm.  The team leader acquiesces, saying in effect that he’s lucky the opportunity to work exists at all.

So exactly how aren’t Northwestern football players employees?  Might be instructive for Siemian to catch “On the Waterfront” next time it’s on Turner Classic Movies.