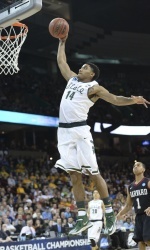 Gary Harris is the whole package – athleticism, diligence, smarts, and a team-first outlook.

Gary Harris is leaving Michigan State after his sophomore year to enter the NBA Draft.  The choice wasn’t easy, according to the statement released by Michigan State.

“This was not an easy decision,” Harris said.  “There hasn’t been a single day where I regretted my decision to return for my sophomore season. It was the right decision for me and I’m better prepared for a successful NBA career because of it. On top of that, I have another season of memories from being around this year’s team. But now it’s time to chase my lifelong dream of playing in the NBA.

“There’s not a doubt in my mind that I’m going to miss Michigan State. There won’t be a bigger Spartan fan than me next season,” Harris continued as he extolled the virtues of being a Spartan.  “I’ll be playing basketball somewhere else next season, but I’ll always be a Spartan. This is my home, and I’m already looking forward to coming back to campus whenever I can, just like all the great Spartans and former players before me.”

Coach Tom Izzo agrees that it’s time for Harris to pursue a shot in the NBA and the millions that come along with being drafted in the lottery,  “Not only do I fully support and celebrate Gary’s decision, but after my information gathering process, I recommend it. I expect Gary to be a high pick in the draft, but more importantly, I know that he is well prepared for a long career.

“The cool thing about this process is that numerous times Gary has expressed to me his desire to always be an active part of this program,” Izzo said. “Given the relationships he’s developed with his teammates, his coaches, and former players, he’s going to be a valuable resource for me next season.”

Harris was clearly different as a high school player at Hamilton Southeastern High School in Fishers, Indiana.  Mr. Basketball in 2012, Harris was not only a a polished player and intense competitor on the hardwood, he would have been a difference maker as a wide receiver had he continued to play football in college.

A gritty defender and gifted scorer, Harris is a team-first player who has always allowed the game to come to him.  The goal has never been to stand out, but to contribute to the success of whatever team he played for.

The NBA team that drafts Harris will get a 19-year old superb athlete who works, listens, fits, and competes.

ESPN’s Chad Ford has Harris as the 10th play selected in his latest mock draft and CBS has him going 13th.

Harris is a great kid by all accounts, and will be the first HSE grad to play in the NBA.  He will not be the first HSE basketball player to play professional sports.  Joe Reitz is an offensive linemen for the Indianapolis Colts after enjoying a successful basketball career at Western Michigan.