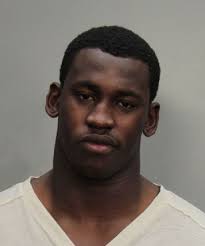 Former Mizzou Tiger Aldon Smith failed to follow the golden rul of airport decorum – don’t imply you have a bomb.

Talent and fame extract idiots from trouble all the time, but there are behaviors allowable by being Alden Smith of the San Francisco 49ers are meaningless.

There is a saying, “That’s as dumb as yelling bomb in an airport.”  Smith put that to the test yesterday as he literally did exactly that as he told law enforcement that he was in possession of a bomb after being randomly selected for a secondary search at LAX.

It’s likely that Smith was angry about being pulled for the pat down, and sarcastically mentioned TSA officers were smart because he had a bomb.  Maybe he said it to be funny.

One thing any frequent air traveler can tell you is that if law enforcement and customs officials have a sense of humor, it is not displayed in any form while they are on the job.  Security is a priority, and a few laughs about bombs don’t enhance the sense of safety.

The 49ers are dealing with Smith acting like an entitled buffoon for the umpteenth time, but despite three felony counts of possession of an assault weapon and two DUIs, he can still get after the passer, so meaningful consequences have yet to be brought to bear to corral Smith.

He went through rehab during the 2013 season and missed five games, but still tallied 8.5 sacks.  That may have helped Smith become sober, but it evidently didn’t make him any smarter.

The sad part of the downward spiral that ensnares people whose talent allows for destructive actions is that the bill eventually comes due, and by then it’s too late.

Giant paychecks make people impervious, or so they think.  They are wrong.  The athletic superiority Smith possesses is fleeting.  Maybe it lasts two years, five years, or 10 years, but eventually age or injury returns immature mopes to mortality, and many times the formerly immortal do not adjust easily to being like everyone else.

Guys like Smith are surrounded by yes men who laugh at everything they say and do, and mistaking the behavior of those being paid for their support should not be assumed to transfer to TSA officers who are among the most serious people on the planet.

One side note – What the hell is going on at the University of Missouri?  Smith, a former Missouri football player, is just the latest in a long line of current of former Tigers who run afoul of the law or societal mores.  Not sure whether Gary Pinkel targets potential problems, if a lack of discipline while at Mizzou causes idiocy to blossom, or whether the water in Columbia is tainted, but it seems to be even money that the subject of a young athlete gone wrong story will either be or has been a student-athlete at Mizzou.