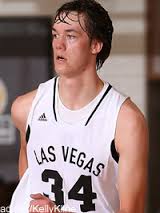 Stephen Zimmerman plays a lot like a left-handed Cody Zeller, and Indiana could use another one of those.

There are enough parallels between 2015 big man Stephen Zimmerman and Indiana change agent Cody Zeller that IU fans should be excited about the possibility of the #4 ranked player in the 2015 high school class accepting Tom Crean’s offer.

Zimmerman looked very athletic and polished for a junior-to-be seven-footer last summer at the Adidas Invitational last July, and he looks even better now in this Oakland Soldiers Spring Extravaganza highlight tape.

No one misses shots in a highlight tape, but the polish Zimmerman shows in his array of post moves as well as the way he runs the floor has coaches drooling.  Indiana is joined by Kentucky, Arizona, Kansas, North Carolina, and many others as options for the services of a very impressive player and young man from Bishop Gorman in Las Vegas.

Talking to him in Las Vegas last year, Zimmerman was easy to like.  He was much more concerned with people seeing the quality of play from under-recruited teammate Noah Robotham than himself.

Zimmerman won’t be playing in Indianapolis this summer as he will be on the NIKE EYBL circuit, so chances for Hoosiers fans to see him play will require travel.